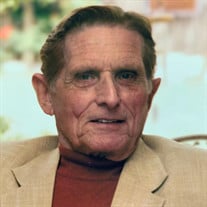 James Pinson passed away on Friday, September 25, 2020, in Edmond, OK. He was born on July 24, 1923, in Hale Center, TX, the first son of Roger and Jo Bailey Pinson. He grew up as a typical West Texas depression-era boy, working in the family drug store, attending school and church, and playing with friends. He and his younger brother, Maxey, spent many hours inventing all sorts of gadgets, writing a neighborhood newspaper, and being typical mischievous brothers. After graduation from Plainview High School, James attended Wayland College in Plainview, TX, and graduated in 1942. That summer he took classes at Texas Tech University and then headed to Hollywood to try his acting skills. After a short time in Hollywood, he returned to Hale Center to work in the family drug store until he was drafted into the U.S. Army in March of 1944. After basic training and additional training as a clerk/typist, he was handed a rifle and sent to Europe to fight as WWII raged on. James soon found himself in the middle of the Battle of Bulge, fighting the Germans and the sub-zero cold, and being trapped behind enemy lines. After being trapped for over 20 days with no food and under heavy enemy fire, James and his fellow surviving solders were rescued by other American troops and sent back from the front to recover from wounds and severe frostbite. For his courageous service he was awarded a Purple Heart and Bronze Star. When he finally recovered from his wounds, he was discharged in September 1945 and returned to Hale Center to work again in the family drug store. From 1946 through 1948 James attended Texas Tech University and graduated on January 31, 1949, with a Marketing Degree. He continued his post graduate education by attending school in France in 1949 and seeing parts of Europe from a very different perspective than what he saw in the war. Upon returning to Lubbock, TX, he entered his chosen field of Interior Design and worked for several local designers for a few years before starting his own firm, James Pinson Interiors, which was located on Broadway in Lubbock for many decades. James served clients all over West Texas and the Dallas area as well as in other parts of the nation. He did residential and commercial interior design work, designed and installed home furnishings and did many custom home designs. With a flair for the unusual and unique, he expanded the boundaries of design work and served his clients and their families for many generations. He was always dressed in the latest fashion to complement his design work. Known for his extensive shoe collection, he told one relative that he promised his feet that he would always take care of them after suffering severe frostbite during the war. James was involved in his church, the First Church of Christ, Scientist, Lubbock, where he served diligently on several committees and as a reader. After moving to Edmond, OK, to be closer to family, he attended the First Church of Christ, Scientist in Edmond. James was preceded in death by his parents, Roger and Jo Bailey Pinson, and his brother, Maxey. He is survived by his nephew, Kent Pinson, and wife, Susan, of Edmond; nieces, Kay Willis, of Chickasha, OK, and Carol Pinson, of Dallas, TX; along with great nephews, Cody Willis, of Chickasha, OK; Zach Pinson and wife, Chi, of Hanoi, Vietnam; Zane Pinson of Oklahoma City; Sam Pinson of Brooklyn, NY; and niece, Kristine Pinson, and husband, Josh Coombs, of Oklahoma City; along with great-great nephew, Emmett Coombs. He is also survived by numerous generations of cousins in Texas and across the United States. He was especially close to his cousins, Mary Crawford, whom he thought of as his little sister, and Walter Legg, Bobby Legg, Danny Legg, and Mary Jean Hilton. James lived a rich life, full of adventures and friendships and to honor his life a graveside service will be held at 1:00 PM, Monday, October 5th at the Hale Center Cemetery in Hale Center, TX. All are invited to join the family in celebrating James’ life.

James Pinson passed away on Friday, September 25, 2020, in Edmond, OK. He was born on July 24, 1923, in Hale Center, TX, the first son of Roger and Jo Bailey Pinson. He grew up as a typical West Texas depression-era boy, working in the family... View Obituary & Service Information

The family of James R. Pinson created this Life Tributes page to make it easy to share your memories.

Send flowers to the Pinson family.