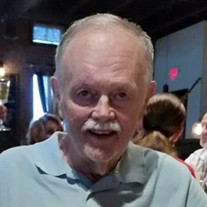 James William “Jim” Lewis was born on July 13, 1945 to William Thomas and Daisy Agnes (Davidson) Lewis in his grandmother’s bedroom in Hartshorne, OK. Jim grew up in the Haileyville/Hartshorne area, and graduated from McAlister High School. Upon graduation, Jim joined the United States Army and worked his way up to become a Green Beret. After being honorably discharged from the Army, Jim went on to attend and graduate from University of Central Oklahoma. Jim started his professional career working for Sears, where he became a manager and eventually retired after 27 years. During this time, he met Dana Blaylock and were married on September 10, 1982. To this union, Jim brought his children, Kellie Cunningham and Thomas Lewis. Jim and Dana were married for 36 years, and were blessed with 4 children, Jason Warren, Brenna Clair, Caitlynn Joelle and Emily Ann-Marie. Jim loved his family and enjoyed spending time with them, especially his grandchildren. Jim and Dana were members of Holy Trinity Lutheran Church for the last 30 years. Jim is preceded in death by his daughter, Caitlynn Joelle Lewis, parents, William and Daisy Lewis, and nephew, William Treavor White. He is survived by his wife, Dana Lewis; daughter, Kellie Cunningham-Johnson; son, Thomas Lewis and his wife Tiffiny; son, Jason Lewis; daughters, Brenna Lewis and Emily Lewis and her better half, Michael Butcher; grandchildren, Chelsea and Randi Chandler, Lane Johnson-Lewis, Aditsan John Watson and Elliot Joelle Butcher; sister Ann White as well as a host of family, friends and co-workers. Come-and-go visitation for Jim will be held on Tuesday, November 27, 2018 from 9 a.m.–8 p.m. with the family to receive friends at a reception from 6-8 p.m. at Crawford Funeral Service, 610 NW 178th St. Edmond, OK 73012. Funeral services will be held at 2 p.m. on Wednesday, November 28 at the funeral home chapel with burial to follow at Gracelawn Cemetery, Edmond. The family of Jim would like to thank Dr. Craig Evans, staff at Mercy Westbrook, Good Shepherd Hospice and Grace Living Center for the continued care, love and support for Jim and his family. They would also like to thank Rev. Barrie Henke and the Holy Trinity Lutheran Church congregation for the continued prayers for Jim and their family.

James William &#8220;Jim&#8221; Lewis was born on July 13, 1945 to William Thomas and Daisy Agnes (Davidson) Lewis in his grandmother&#8217;s bedroom in Hartshorne, OK. Jim grew up in the Haileyville/Hartshorne area, and graduated from McAlister... View Obituary & Service Information

The family of James 'Jim' Lewis created this Life Tributes page to make it easy to share your memories.

Send flowers to the Lewis family.