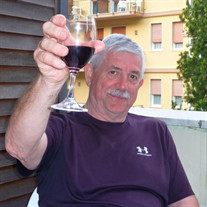 James E. “Jim” Judd, born February 6, 1949, in Alamosa, Colorado, died in Edmond, Oklahoma on June 8, 2020 after battling a long-term illness. Jim said he was born into this world ornery and would remain that way until the day he died. Jim’s father was killed by a drunk driver when he was an infant. He was raised by his mother and step-father in southeastern Oklahoma and graduated from Heavener High School in 1967. He first attended Carl Albert Jr. College, later moving to the University of Oklahoma where he graduated in 1973 with a degree in Criminal Justice. Immediately following graduation, Jim joined the United States Marine Corps and went through flight school in Pensacola, Florida. Jim served with distinction and was honorably discharged from the Marine Corps with the rank of Captain in 1977. Jim joined the United States Border Patrol in 1978 and served on both the southern border in Chula Vista, California and the northern border in Derby Line, Vermont, and Rouses Point, New York. In 1983, Jim joined the Federal Bureau of Investigation. His first office was New Orleans where he worked public corruption and violent crime matters and was a member of the SWAT team. In late 1985, Jim was assigned to the Miami field office where he was assigned to work matters regarding major police corruption matters. As one of the few undercover Spanish speakers in the FBI at the time, he was most proud of his work during a long-term undercover assignment on the Miami River Cops case. In 1991, Jim was assigned to the Oklahoma City office and lived in Edmond. Jim became a polygrapher in 1993 and played a major role in investigating the bombing of the Alfred P. Murrah building. In 1996, Jim was promoted and served as a program manager at FBI Headquarters in Washington D.C. In 1998, Jim was promoted to a supervisory role in the San Francisco office over a public corruption squad. It was in San Francisco where Jim met his wife of 20 years, Sharon V. Childers Schuetz Judd. Later that same year, Jim became the senior supervisory resident agent over the St. Thomas resident agency which included all of the U.S. Virgin Islands. Jim retired from the FBI in 2000. In retirement, Jim continued to work as a government contractor in San Francisco and Edmond. He also served as a military advisor in Iraq and Afghanistan. He returned to Edmond after becoming ill in Afghanistan. After a period of years, he received a diagnosis at the Mayo Clinic in Rochester, MN, but would continue to battle his illness until his death. Jim considered himself a cowboy. He loved his family, horses, fishing and hunting, cooking, working in his garden, helping his wife with her business, and was an avid fan of OU football. When Jim was younger, he loved the rodeo and riding bareback broncos. Jim always liked to be around his family and friends, and was willing to drop anything to help whenever needed. He lived a full life and will be greatly missed. Jim is survived by his wife, Sharon V. Childers Schuetz Judd; his son, James Clinton Judd; his daughters, Heather Ann Judd and Cristin Schuetz Lockwood; and ten grandchildren and four great-grandchildren. He was preceded in death by his parents, Clarence Judd and Anise Dean Hall, and daughter, Michael “Mikie” Shea Judd. A celebration of Jim’s life will be held June 18, 2020 at 1:00pm at Mama Roja Mexican Kitchen, 9219 Lake Hefner Parkway, Oklahoma City. In lieu of flowers, please make a donation to St. Jude’s Children’s Research Hospital.

James E. &#8220;Jim&#8221; Judd, born February 6, 1949, in Alamosa, Colorado, died in Edmond, Oklahoma on June 8, 2020 after battling a long-term illness. Jim said he was born into this world ornery and would remain that way until the day he... View Obituary & Service Information

The family of James E. "Jim" Judd created this Life Tributes page to make it easy to share your memories.

Send flowers to the Judd family.