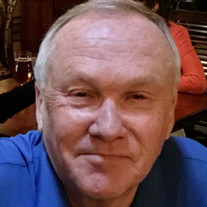 Marion “Jack” Due, 75, passed away peacefully with his loving family by his side on July 23, 2020 in Oklahoma City, Oklahoma. He was born on October 24, 1944 in Ponca City, Oklahoma to Marion Jack and Grace Due. Jack attended and graduated from Hobart High School in 1962, then went on to attend SWOSU, UCO, and Oklahoma State. He considered himself as a “road scholar” because of the many universities he attended. In 1971, he married the love of his life, LaDonna, and spent many decades together. January 2021, would have been a total of 50 years of joy, laughter, and love together. Jack worked and was dedicated to Bayer Corporation starting in 1967 all the way up until 2002 when he made the decision to retire. During his retirement years he continued to work and started a new career with Home Creations. Jack is preceded in death by his parents, Marion and Grace Due, and brother, James R. Due. He is survived by his wife and best friend, LaDonna, his children Chad and his spouse, Kareem, of Fort Lauderdale, FL, Brandon and his wife, Miriam, of OK, and Tyler and his wife, Amanda, of OK, and his grandchildren, Taylor and Nelson, who he was extremely proud of. Jack is also survived by many loving family members, his brother in law David Harris and his wife, Annette, of Guthrie, OK, nephew Jeff Due and his wife, Kerri, of Edmond, OK, Lydia, Grace, and Caroline, and many cousins and friends. Jack was a family man who praised our Lord and savior. He was known for being the “most loved man” with the sweetest smile and an easy-going attitude. He was fair, loyal, and very patient. Many would say that he was the best husband and LaDonna was incredibly lucky to have been by his side for the many years they spent together. He was also known for being the best father and Poppy. Jack never met a stranger and will be greatly missed by all. A service celebrating the life of Jack Due will be at 2pm on Friday, July 31 at Crawford Family Funeral Service, Edmond. The service will be broadcast live here through his memorial page for those who wish to attend from a distance. In lieu of flowers, memorial donations may be made in Jack's honor to the Hobart Educational Enrichment Foundation (H.E.E.F) to benefit the Hobart, Oklahoma Public Schools. Donations may be made at the following link: https://www.hobart.k12.ok.us/DISTRICT/heef.htm ***Face masks will be required along with appropriate social distancing for those in attendance.

The family of Jack Due created this Life Tributes page to make it easy to share your memories.

Marion “Jack” Due, 75, passed away peacefully with his loving...