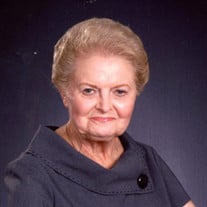 Inez Louise Corley was born in Tuskahoma, Oklahoma on March 16th, 1936 to Ray and Edna Renegar. In 1950 the family moved to Oklahoma City. She graduated from Classen High School in 1954 and began working for Waugh Brothers Heating and Air Conditioning. In 1960 she married the love of her life Lloyd (Sonny) Corley. They had one daughter, Kimberly. She was a long-time member of Northwest Baptist Church. She served several Sunday School departments as secretary/treasurer. She volunteered during Vacation Bible School, Chaps Camp, Trunk or Treat, and decorating the Singing Christmas Tree. She loved singing in the choir. When her health declined and she could no longer attend in person, she longed to able to see the ladies from her class. She retired from Waugh Brothers after working 20 years. Then, in 1980 she decided to go back to work to help pay for college for Kimberly. She started working at the Baptist Foundation of Oklahoma and remained there for 19 years. After retirement she and Sonny traveled. They were able to take dream trips to England, Ireland, Scotland, Alaska, the Caribbean, and Hawaii. She was very disappointed when they were unable to travel any longer. In 1991 she gained a “son”. When Scott and Kimberly married, he became part of her family and she loved him like he was her own son. In 1994 she was blessed to become a “Mimi”. That was her greatest joy. She loved Lydia and Joshua more than life itself. She was at every ball game, concert, and halftime performance. She was preceded in death by her parents Ray and Edna Renegar. She is survived by her loving husband Lloyd of 60 years, daughter Kimberly and her Husband Scott Wilcox, grandchildren Lydia and Joshua Wilcox, sister Agnes Welton and her husband Boyd, sister-in-law Fern Corley and numerous nieces, nephews, cousins, and close friends. A come-and-go visitation and reception will be from 6-8pm on Wednesday, March 24th at Crawford Family Funeral Service, Edmond. A service celebrating her life will be at 1pm on Thursday, March 25th at Northwest Baptist Church in Oklahoma City. The service can be watched via livestream at: https://www.facebook.com/NWBaptistOKC.

Inez Louise Corley was born in Tuskahoma, Oklahoma on March 16th, 1936 to Ray and Edna Renegar. In 1950 the family moved to Oklahoma City. She graduated from Classen High School in 1954 and began working for Waugh Brothers Heating and Air Conditioning.... View Obituary & Service Information

The family of Inez Corley created this Life Tributes page to make it easy to share your memories.

Send flowers to the Corley family.