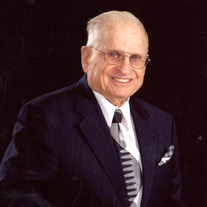 Hubert Clarence Anderson, 97, of Oklahoma City, OK passed away peacefully on July 22, 2021, at Vitality Living Village in Oklahoma City, OK. Born on December 10, 1923, in Hollister, OK he attended grade school through high school in Grandfield, OK and graduated in 1941. He worked as a farm hand planting and harvesting crops, tending the livestock, and repairing fences and farm machinery on the family farm prior to joining the U.S. Army. Clarence was inducted into the U.S. Army on June 29, 1943 and served his country with the U.S. Army’s Headquarters Battery, 8th Field Artillery Observation Battalion as a Private First Class during WWII. He was a qualified marksman and served as a surveyor topographic for 21 months in Normandy, the Rhineland Ardennes, Northern France and Central Europe. Decorations and citations received were: EAME Theater Ribbon, One Silver Service Star, Victory Ribbon and a Good Conduct Medal. He was honorably discharged from the U.S. Army on December 4, 1945. Clarence subsequently joined the Oklahoma Highway Patrol (OHP) and was stationed at Okemah, Sallisaw, Enid District Headquarters, Guymon District Headquarters, McAlester District Headquarters and Commander of the Muskogee Turnpike. He graduated from the FBI National Academy in Washington D.C. in 1967. He went to night school and obtained his Associates Degree in Police Science and was a member of the National Honor Society, Phi Theta Kappa. Clarence was also a NRA Certified Firearms Instructor, a U.S. Coast Guard Auxiliary Certified Instructor and was an expert marksman winning numerous trophies at OHP shooting competitions. Clarence retired from the OHP after 20 years of service and then went on to work 10 years with the Oklahoma Department of Corrections as the Superintendent and later as the Director of the Muskogee Community Treatment Center (Pre-Release Work Center) in Muskogee, OK. He lived most of his adult life in Muskogee, OK before moving back to Grandfield, OK in 2000 after retirement. He was a supportive and loving husband and father who enjoyed bird hunting, gardening, fishing, travelling all over the U.S. in their fifth wheel, being outdoors, attending the annual Bob Wills Day celebrations for several years in Turkey, TX, and attending annual reunions with his Army buddies. Clarence and his wife Theresa were also able to enjoy a 2 week trip over in Europe. He is survived by, his four daughters and their spouses, Linda and Dr. Max Yancy of Oklahoma City, Rita Anderson of Fort Smith, AR, Carolyn Perkins of Port Charlotte, FL, Dana and Tim Colvin of Valentine, NE, 6 grandchildren, 13 great grandchildren, his brother, Tom Anderson of Kaufman, TX, one niece and one nephew. He was preceded in death by both of his parents, Thomas S. Anderson and Velma Anderson and his wife of 69 years, Theresa Anderson. Crawford Family Funeral Service, Edmond, OK is in charge of funeral arrangements. A funeral service and burial will both be held at the Ft. Sill National Cemetery, Elgin, OK on July 26, 2021 at 9:00 AM. In lieu of flowers, memorial donations may be made to the Alzheimer’s Association – Oklahoma Chapter, 6601 Broadway Ext., Suite 120, Oklahoma City, OK 73116 or by calling (405) 319-0780.

The family of Hubert "Clarence" Anderson created this Life Tributes page to make it easy to share your memories.