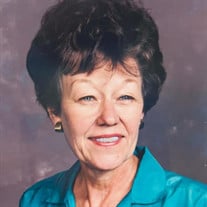 Helen Ann Smith Thomas Lawson was born to William Raymond and Evelyn Sawtell Smith December 22, 1939, in Lincoln, Nebraska. At age two Helen's family moved to Kansas City, Missouri, where she attended Southwest High School, graduating in 1957. Helen attended Kansas State University where she was a member of Alpha Delta Pi sorority and graduated with a B.S. in Elementary Education. In 1960 she married David Leigh Thomas of Ulysses, KS. Helen was a member of Beta Sigma Phi in Lawrence, KS, Chanute, KS, and Oklahoma City. She joined chapter DP of P.E.O. in Chanute and later transferred to chapter CW in Oklahoma City. From 1975 until 1998, Helen taught in the Deer Creek School System. During that time she instructed, loved and adored hundreds of students and their families. From 1999 - 2003, Helen worked at The Daily Oklahoman in the Newspapers in Education Department which she enjoyed as she continued to maintain contact with students. In 1984 Helen married Alven Lawson. They belonged to the Territorial Squares Dance club in Guthrie and the Frontier Sams' chapter of Good Sams' RV club. In 1998 they joined Church of the Servant. Many happy hours were spent with these wonderful friends. Helen is preceded in death by her husband Alven. She is survived by her children: Kelly Leigh Thomas Nix and husband Jimmy, David Craig Thomas and wife Amber, grandchildren: Jamie, Andy, Josh and wife Taylor Nix, Tyler, Tanner, and Tinsley Thomas. Helen is also survived by her sister Carol Bahr and husband Rol, niece Julie Davis and family, and nephew Jason Bahr and family of the Kansas City area. She is also survived by: Randy Lawson and wife Timi of Frisco, CO, Dan Lawson and wife Andrea of Lampasas, TX, and Dr. Ronnie Lawson and wife Rhonda of Chico, TX, grandchildren Baylie, Cassidy, Rane, Josh and wife Nikki, Zach and wife Megan, Nicholas, Nora, Joel and wife Christine, Janis and husband Austin, and 11 great grandchildren. In lieu of flowers donations can be made to The Paralyzed Veterans of America, P.O. Box 758589, Topeka, KS 66675-8589 or visit pva.org. A funeral service to remember and celebrate Helen's life will be held Thursday, November 11, 2021 at 11:00AM at Church of the Servant in Oklahoma City. Visitation with the family will be held one hour prior to services Thursday at 10:00AM.

The family of Helen Lawson created this Life Tributes page to make it easy to share your memories.

Send flowers to the Lawson family.