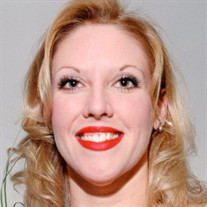 On October 10th, 2021, Jesus said, “Well done thy faithful servant,” and welcomed home our beloved Heidi. Heidi Michelle Hodges – Saucier was born on August 28th, 1971, to D’Arcy & Sharon Hodges. She met the love of her life, Andre Saucier and they married on April 22nd, 2000. It was the role of mother that Heidi most cherished. On December 12th, 2001, she brought home her son, Reagan. Six years later, Reagan was joined by his sister, Ryssa, on May 30th, 2007. Heidi loved the treasured time she got to spend with her children. She considered them her greatest accomplishment. Heidi enjoyed many things, one being funny movie quotes. She had an encyclopedic knowledge of them all and could tell you one in the blink of an eye. One of the other things she enjoyed was Classic Rock. She attended MANY concerts with her friends over the years. REO Speedwagon, Styx, Boston, and Journey were among her favorites. She had a love for music which she shared with her son, Reagan. She also had a love and compassion for animals, which she shared with her daughter, Ryssa. Heidi was an enthusiastic supporter of organ tissue donation and would be delighted to know that many people will live longer, healthier lives because of her gracious donations. Heidi is preceded in death by her father D’Arcy Hodges; Mother Sharon Hodges Ericson; Grandparents Reginald & Frances Karroll; and Grandparents Bryan & Billie Jo Hodges. Heidi is survived by husband Andre Saucier; Children Regan Saucier & Iryssa Saucier; Sister Heather Hodges O’Brien & husband, Jim; Cousins Shelli Hodges Spencer & husband, Kevin, and Robin Griffin. She also is survived by many Uncles, Aunts, Cousins, & Friends. Services to remember and celebrate Heidi's life will be held on Tuesday, October 19, 2021 at 2:00PM at Crawford Family Funeral Service. Services will be made available via livestream here on Heidi's tribute page, just prior to services beginning.

The family of Heidi Hodges-Saucier created this Life Tributes page to make it easy to share your memories.

Send flowers to the Hodges-Saucier family.