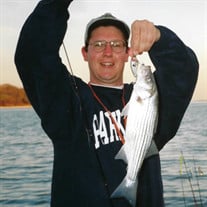 Gregory Douglas Allen of Marietta, Georgia died on February 7, 2022. He was born September 10, 1970 in Stillwater, Oklahoma. He will forever be remembered as a loving, kind husband, father, son, brother, uncle, and friend. Greg attended and graduated from Edmond Memorial High School in Edmond, Oklahoma in 1989. While in high school, he excelled academically & was in the “National Honor’s Society” organization. He enjoyed playing sports particularly baseball and basketball. Also, he was a member of the Boy Scouts organization and eventually earned all the badges required to obtain his “Eagle Scout” badge. For two years during the summers of high school, he went to Philmont Scout Ranch which is known as the premier, high adventure for all boy scouts located in New Mexico. For college, he attended Oklahoma State University in Stillwater, Oklahoma and graduated in 1993 with a Bachelor of Science in Business. He was a member of the Phi Delta Theta fraternity- Oklahoma Beta Chapter. After college, Greg moved to Tulsa, Oklahoma and accepted a job with Wiltel Communications. He eventually got married and had a son, Connor Douglas Allen. However, after ten years, he and his wife divorced. He then moved to Atlanta, Georgia and started a new career with Alpha Technologies where he worked for approximately six years. He met and married Catherine Haney on July 1, 2013. Together, they enjoyed entertaining family and friends at their home in Marietta, Georgia. Finally and just recently, Greg transitioned into a new job with Coyote Logistics, where he had just completed his formal training. He was thrilled to be a part of this company and was excited about the many upcoming opportunities. Besides being fond of slapstick movies, OSU football games & NFL football games, Greg loved being with his family and friends. For many years, he treasured and enjoyed numerous, fishing excursions with his high school and college buddies. These were special times for him and he absolutely cherished being on the lake. In addition, he made annual trips back home to Oklahoma where he went ice fishing for striped bass with his dad on Lake Texoma. He is preceded in death by his father, Dr. Richard D. Allen. He is survived by his wife, Catherine Haney-Allen; his son, Connor Douglas Allen; his mother, Charlessa W. Allen of Overland Park, Kansas; his sister, Beth Sutton (husband, Kurt Sutton) and his two nieces, Elizabeth and Meredith Sutton of Leawood, Kansas. A “Celebration of Life” service for Gregory Douglas Allen will be held at Crawford Family Funeral 610 NW 178th Street Edmond, Oklahoma 73012 on Saturday, February 26, 2022 at 2:00 p.m.

Gregory Douglas Allen of Marietta, Georgia died on February 7, 2022. He was born September 10, 1970 in Stillwater, Oklahoma. He will forever be remembered as a loving, kind husband, father, son, brother, uncle, and friend. Greg attended and... View Obituary & Service Information

The family of Gregory Douglas Allen created this Life Tributes page to make it easy to share your memories.