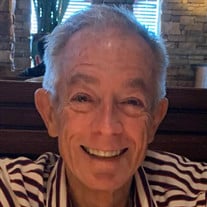 Greg was born in Lawrenceville, Illinois to Robert Lee and Jacqueline Lee Aldridge. After receiving a B.S. degree (Accounting and business) in 1979 from Southwestern Oklahoma State University, Greg began his 37-year career in the telecommunications business. His first job was with Southwestern Bell, (now AT&T) in Oklahoma City, before being transferred to St. Louis in 1986. In 1988, he did work for the Archdiocese of St Louis managing the Accounting and computer training center. After deciding to move closer to family, they moved to Ark City, KS which would be home for 25 years. Greg accepted the position of Finance Manager at KanOkla Telephone Association in Caldwell, KS. He was appointed CEO in 1993 and continued until he had to take disability, due to Parkinson’s Disease, in 2016. While working at KanOkla Greg served on many boards, both locally and nationally. He received many awards including the Bill Barnes Award. Greg married Susan Wortham on March 30, 1985. During their 36 year 11 ½ months marriage they enjoyed traveling and spending time with family and friends. They had two sons, Bryan and Jeff, while living in St. Louis. Greg considered the boys “his greatest accomplishment and blessings in life.” He enjoyed spending time with them, going to movies and OSU football games. Greg’s main hobby was working out and staying fit which would help later in life fighting Parkinson’s. He also enjoyed participating in community and church theater while living in Ark City. He also served many years as Deacon and Elder at Central Christian Church. Greg’s faith in Jesus Christ and the promise of eternal life sustained him during his 18-year battle with Parkinson’s. Greg decided from the beginning to never let the disease define who he was. Greg was preceded In life by his parents, father in law Gordon Wortham, and grandparents. He is survived by his wife, Susan, 2 sons and daughters in law, Bryan and Christine, Jeff and Courtney, 3 granddaughters he considered an amazing blessing, Chloe, Georgia, and Emerson. Also, his dog, Tillie of 12 years. Greg had two brothers and sister in laws, Bob and Barb, Randy and Chris. Mother-in-law, Jane Wortham, Brother-in-law, Ron and Debbie, sister-in-law Carol. Many nieces, nephews and extended family and friends that held a special place in his heart. In lieu of flowers, donations may be made to the Oklahoma Parkinson’s Foundation- If you prefer to pay by check or cash, please mail your donation to: 720 W Wilshire Blvd #109 Oklahoma City, Ok 73116. Or go online to: https://parkinsonoklahoma.com/donate/ *Services will be made available via livestream here on Greg's tribute page, just prior to services beginning, Thursday.*

Greg was born in Lawrenceville, Illinois to Robert Lee and Jacqueline Lee Aldridge. After receiving a B.S. degree (Accounting and business) in 1979 from Southwestern Oklahoma State University, Greg began his 37-year career in the telecommunications... View Obituary & Service Information

The family of Gregory "Papa" Aldridge created this Life Tributes page to make it easy to share your memories.

Greg was born in Lawrenceville, Illinois to Robert Lee and Jacqueline...

Send flowers to the Aldridge family.