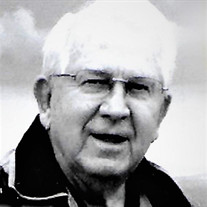 Gordon Gunn, 91, of Oklahoma City, OK, won his battle with Alzheimer’s and entered his heavenly home on December 27, 2018. Gordon is survived by his wife, Bobbie Diffee Gunn of 63 years, daughter Robin Gunn, son Greg and wife Rhonda, son Phillip and wife Kara, and son Nathan and wife Sally. He is also survived by his mother, Alma Gunn, sister Jackie Bounds, 13 grandchildren, 4 great-grandchildren and many nieces, nephews, and cousins. He was preceded in death by his twin daughters, Brenda and Belinda, his biological mother Zada, his father Carl Gunn, brother Truman, sister Birdie Fay Terrell, sister Ellen Mahaffey, and sister Laura May Stewart. Gordon was raised in Flaxville, Montana, but then moved to Oklahoma and graduated from Edmond High School. He then proudly served in Germany during WWII with the U.S. Air Force and defended our great country. Upon his return, he attended Southern Nazarene University and earned dual Bachelor degrees in Biology and Psychology. It was there that he met his wife, Bobbie. Gordon worked for 25 years as a pharmaceutical rep and then another 17 in financial services with his son, Greg. He enjoyed hunting, fishing, and was an avid reader of Christian books. His greatest passion and zeal, however, was his love for the word of God and being a Godly example to his children. He loved serving as a home group bible teacher and deacon in the churches he attended. He never let an opportunity pass to tell people that Jesus loved them and that God had a plan for their life. His witness for Christ never wavered even as the Alzheimer’s advanced. The family will be forever grateful for the staff at the VA Center in Norman for so lovingly taking care of him for the last 5 ½ years of his life. His memorial service will be held at Victory Church at 4300 N. MacArthur Blvd, Warr Acres, OK on Thursday, January 24th at 1:30 pm.

The family of Gordon C. Gunn created this Life Tributes page to make it easy to share your memories.

Send flowers to the Gunn family.