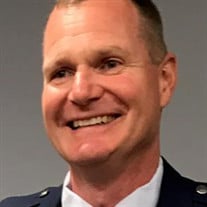 Lt. Col. George Thomas Current, Jr., 49, of Edmond, Oklahoma died September 17, 2021 at his home peacefully. He was born November 13, 1971, in Olney, Illinois, to George Thomas Current, Sr. and Patricia Mae Lawrence Current. The family moved to Edmond, OK in 1974 to pursue his father’s career in Geology. He attended Edmond Schools and graduated from Edmond Memorial High School in 1990. He joined the Oklahoma Air National Guard during college in November 1991. He continued his education at Oklahoma State University where he graduated in 1996 with a Bachelor Degree in Mechanical Engineering. He met his wife and soulmate, Kelly, at Oklahoma State University. He was a mechanical engineer at American Airlines in Tulsa for many years before being summoned to Edmond for a full-time, active-duty position at the base. Tom deployed three times and loved his country dearly. The family is truly a military family and we are so grateful for the sacrifices he made for our country. Tom remained at the same base from November 1991 as an Airman to July 2019 when he retired as a Lieutenant Colonel due to medical issues. He loved his family, football, anything OSU, working hard in the outdoors or working on anything with a motor. More importantly, he loved playing with his kids, his friends and anyone that would like a smile and laughter. His smile was addictive. He is survived by his spouse, Kelly Current, and three daughters; Kady, Riley, Madi. His mother, Patricia Mae Current, sister Jennifer Freels and spouse Roger Freels. His mother-in-law, Shirley Taylor, and his sister-in-law Kendra Taylor. He has so many aunts, uncles, cousins, nephews, nieces, family members, military family and special friends. The love is never-ending. He was preceded in death by his father, George Thomas Current, Sr. and his great Aunt Jean Kirk, his father-in-law, Steve Taylor and mother-in-law, Diana Taylor. He fought for 7 years after being diagnosed with Stage IV Colon Cancer. His fight, his drive, his strength will never be forgotten. He was an inspiration to all! A service honoring his life will be at 11am on Saturday, September 25th at St. Augustine of Canterbury Episcopal Church.

The family of Lt. Col George "Tom" Thomas Current Jr. created this Life Tributes page to make it easy to share your memories.

Send flowers to the Current family.