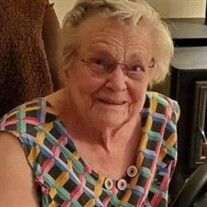 Geneva Katherine Warren born November 20, 1921 in Brownwood, TX to Ira and Eula Michael. She is proceeded in death by her husband Clarence William Warren Jr (Ace), their daughter Martha Kay Warren, 2 brothers: Ray & Roy Michael, a great grand-daughter and her parents Ira & Eula Michael. Geneva became a Christian as a young adult teaching Sunday school and enjoyed reading her bible. She did private duty nursing in her mother’s nursing home in Brownwood, TX. She also did private duty nursing care in Grandfield, OK. Geneva met and married the love of her life Ace Warren where they ran off together and secretly married July 29th, 1938 in Brownwood. Together, they had 4 children, 3 who are living. Jerry Wayne Warren of Poteau, OK. Beverly Little of Hobbs, NM and Dianna MacWilliams of Edmond, OK. She is survived by 8 grandchildren, 12 great grandchildren, 5 great great grandchildren and numerous nieces and nephews. Geneva enjoyed sewing, crocheting, quilting and cooking. She won 1st place and Grand Marshal on many quilting pieces. Geneva loved to provide a feast for family including homemade hand breaded fried chicken, mash potatoes & hot rolls and sweet tea. She enjoyed canning and gardening and enjoyed raising sun flowers in her garden that were gigantic! One of Geneva’s last memories in her Grandfield home was a surprise 90th birthday party. She couldn’t figure out why friends and neighbors kept showing up with food and staying around for a visit. When Dianna and her family arrived with the birthday cake made to look like a bed and quilt, we all said SURPRISE! Geneva said she has never had a birthday party in her 90 years of life. In 2010, Geneva moved into her daughter’s house in Edmond OK where she remained until her death on March 4, 2021. Soon after, her grand-daughter Eve introduced her to manicures and pedicures! And that’s how they spent the next 10 years of pampering. Geneva continued cooking and making hot rolls and her famous fruit cake until she started burning the food. Then she learned to tolerate Dianna’s cooking! She loved Braum’s vanilla milk shake and hamburgers. Up until the end, when Eve would visit, Geneva would ask for her candy drawer to be refilled so she had something to snack on throughout the days. However, most of the candy was gone within 1-2 days. Geneva had a sweet tooth like no other. Graveside services will be held at Grandfield Memorial Cemetery on Monday March 15, 2021 at 2:00pm.

The family of Geneva K. Warren created this Life Tributes page to make it easy to share your memories.

Send flowers to the Warren family.