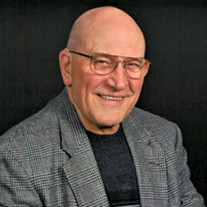 Gene Woods of Edmond, OK, was born in Prairie Grove, AR to Cecil and Dorothy Woods on January 13, 1941. Gene was the oldest of four children; including Roy, Ellen and Alice.  Gene graduated from Farmington High School in 1959, moving to Oklahoma City soon after to attend College. Gene's life-long career was designing highways which he did for the state of Oklahoma. Then after 32 years at the Department of Transportation Gene retired and entered the private sector working for Triad Design Group for an additional 18 years designing even more highways. After his second retirement Gene entered into his new passion; clock repair. Gene was a  member of the Sooner Time Collectors Clock Club for over eight years. Throughout his entire life Gene was always involved in church. Since 2005 Gene and Pat have attended Quail Springs Baptist Church where they are active members of the Drake Sunday School Class.  Gene's hobbies included taking photos, emailing inspirational quotes, completing online crossword puzzles; restoring, repairing and maintaining antique clocks and being content with his life.  Gene was preceded in death by his parents Cecil and Dorothy, and his sister Alice. He is survived by his wife Pat of the home, his daughter Laura and husband Frank Roller of Midwest City, son Andy and wife Kim of Pauls Valley, and son Brett Wellden of Guthrie, grandchildren Nathan and wife Jade Woods of Lawton, Maegan Woods of Lawton, Chaisey Wellden, of Oklahoma City, Garret Wellden of Stillwater and Carmyn Wellden of Guthrie as well as many other relatives and dear friends.  A funeral service will be held to remember and celebrate Gene's life on Thursday, August 19, 2021 at 11:00AM at Crawford Family Funeral Home in Edmond, OK. A come-and-go visitation will be held throughout the day prior, Wednesday August 18, 2021 from 12:00PM-5:00PM, with a formal visitation with the family of Gene present to follow, from 5:00PM-7:00PM, at Crawford Family Funeral Home. Services Thursday will be made available via livestream here on Gene's tribute page, just prior to services beginning. Burial will take place following services at Gracelawn Cemetery in Edmond.

Gene Woods of Edmond, OK, was born in Prairie Grove, AR to Cecil and Dorothy Woods on January 13, 1941. Gene was the oldest of four children; including Roy, Ellen and Alice.  Gene graduated from Farmington High School in 1959, moving to Oklahoma... View Obituary & Service Information

The family of Gene Woods created this Life Tributes page to make it easy to share your memories.

Gene Woods of Edmond, OK, was born in Prairie Grove, AR to Cecil...

Send flowers to the Woods family.