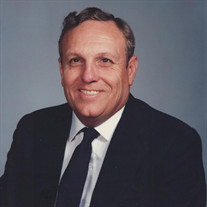 A service celebrating the life of Gene will be held on Thursday, October 29, 2020 at 10 a.m. at the Crawford Family Funeral Service Chapel with a reception for family and friends to follow the service. Masks and social distancing will be strongly encouraged. The family has requested that if you are not feeling well or have or showing symptoms of Covid-19, please stay home and attend the service through the live webcast that the funeral home will be providing. In lieu of flowers, memorial donations in honor of Gene may be made out to Life.Church Oklahoma City, 2001 NW 178th St, Edmond, OK 73012 or https://www.life.church/okc/ or the Alzheimer's Association - Oklahoma Chapter, 6601 Broadway Ext suite 120, Oklahoma City, OK 73116, or https://www.alz.org/oklahoma Gene Westover Allen arrived at his earthy home in Chandler, Oklahoma on July 26, 1931, and departed for his Heavenly home on October 23, 2020. He was welcomed by his parents, Lester and Opal (Westover) Allen and his older brother, Robert L. Allen on both occasions. Gene’s childhood was marked by many difficult situations. He was born during the Great Depression, suffered the loss of his father from an aneurism when he was only 10 years old, and was a witness to the hardships brought on by the Second World War. But Gene learned at an early age that the strength to survive such difficulties is provided by faith in an omnipotent God. Gene graduated from Chandler High School in 1949 and enlisted in the Air Force during the Korean War. He loved to relate how he spent the war in Florida, helping to build a gun range and teaching recruits how to fire a rifle. After his service, he enrolled at Oklahoma A&M in the school of Mechanical Engineering, ultimately graduating in 1958 at what had become Oklahoma State University. It was at O.S.U. that he met the two loves of his life: his wife, Dorothy Jeffrey, and his career, Petroleum Engineering. Gene worked in the Petroleum industry for over 50 years with companies such as Cities Service, Mobil, Harper, and American Exploration, eventually starting his own company, Red Rock Resources, with his brother. He was able to bring his two oldest sons and a daughter-in-law who were also petroleum engineers into the family business as well. Gene was a faithful Christian, an ordained deacon, a Bible teacher and served on many committees for many years at the Village Baptist Church. Gene also used his musical ability in the church orchestra, playing the bass clarinet. In his later years, he enjoyed attending Life.Church with other family members. Gene is survived by his wife, Dorothy, their three sons and their wives: Terry D. Allen and his wife, Sharon; James D. Allen and his wife, Tracy; G. Douglas Allen and his wife, Kelli; and six grandchildren and their wives, husbands and children: Christopher and Angela Allen, Lincoln and Logan; Jennifer Allen Richardson and husband Steven; Michael and Haley Allen and Saylor; Madison Allen Davis and husband Austin; Aaron Allen and Zachary Allen. He is also survived by his nephews, Steve and Jeff Allen, and a niece, Jayne Allen Bell, as well as a host of others. Gene suffered during his last few years with a terrible disease, Alzheimer’s, which robbed him of his memories and ability to participate in his family’s lives. The family is very grateful to the staff of Heritage Point of Oklahoma City and Oklahoma Palliative & Hospice Care for making Gene’s end of life journey so much easier for all of us.

A service celebrating the life of Gene will be held on Thursday, October 29, 2020 at 10 a.m. at the Crawford Family Funeral Service Chapel with a reception for family and friends to follow the service. Masks and social distancing will be strongly... View Obituary & Service Information

The family of Gene W. Allen created this Life Tributes page to make it easy to share your memories.

A service celebrating the life of Gene will be held on Thursday,...