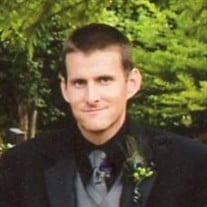 Gavin Wayne Carlson found his place in Heaven on November 25, 2021, on Thanksgiving Day, after unexpectedly passing away. He was born on December 14, 1976, in Wichita, Kansas and raised in Edmond, Oklahoma. He attended the following Edmond Schools; Chisholm, Cimarron and Memorial, graduating in 1996. He graduated from Oklahoma University in 2007. Gavin will be missed greatly by his entire family and the friends he made during his journey through life. The life Gavin lived was full of memories and blessings, he will be remembered for the loving person he became. Gavin touched so many lives during his time on this earth, those who met him surely experienced the thoughtful personality and dry sense of humor that allowed him to connect with just about everyone. Gavin was employed as a legal assistant with the law firm of Daugherty, Fowler, Peregrin & Haught for 9 years in OKC. Continental Land Resources, as a field oil and gas Landman for 5 years. The Federal Aviation Administration in the Registry Department until his death. Gavin had many interests, including working on his two old cars, photography and bicycling. He loved his old Jeep and the even older 65 Plymouth Valiant convertible. He also loved his two Labrador rescue dogs, Bearly & Dooley. He was an active member at St. Eugene Catholic Church and a member of the Knights of Columbus. Though Gavin is no longer here, he will be missed greatly by those he left behind. He is survived by his loving mother and father, Terry and Leslie Carlson; one brother, Erik; sister-in-law, Cindy; and nephew, Coleman. His Aunt Michelle and her family Scott and Adrienne Crawford. His Uncle Mike Holland and his wife Mary. His Uncle Christopher Holland, and Cousins Serena Penn and Brian Hawk.

Gavin Wayne Carlson found his place in Heaven on November 25, 2021, on Thanksgiving Day, after unexpectedly passing away. He was born on December 14, 1976, in Wichita, Kansas and raised in Edmond, Oklahoma. He attended the following Edmond... View Obituary & Service Information

The family of Gavin Wayne Carlson created this Life Tributes page to make it easy to share your memories.

Gavin Wayne Carlson found his place in Heaven on November 25,...

Send flowers to the Carlson family.