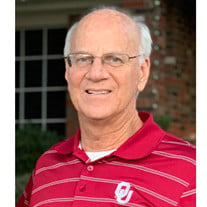 Gary was born in Arcadia, CA to James and Frances Peabody on September 7, 1955. Gary lived in California until he came to Oklahoma to attend physical therapy school at OU. He graduated from The University of Oklahoma in 1980 with a Bachelor of Science Degree in Physical Therapy. He met his wife, Denise Peabody, while in Physical Therapy School. Interestingly, Gary and Denise were both from Southern California before coming to OU and meeting each other. They were married on May 31, 1980 in Etiwanda, CA. After graduation, Gary was the director of Deaconess Hospital and St. Anthony Hospital in the 1980’s. He then went on to work at McBride Physical Therapy clinics in OKC and Edmond for 32 years. Gary was an avid OU football and Thunder fan and enjoyed going to the games through the years. He was a member of Heritage Presbyterian Church in Edmond, OK for 42 years where he served as a Deacon and Elder. Gary, Denise, and their children took many wonderful vacations with extended family, a lot of trips to California to visit family and friends and had plenty of adventures throughout their time together. Gary had a servant's heart, shown not only through his work as a physical therapist, but for his church, his friends, his neighborhood, and his family. He was a wonderful and loving husband, father, and Papa/Grandpa to his grandchildren. He is survived by his wife, Denise Peabody, and their three children: Kim Reading and husband Jeremy; daughter Melissa Egan and husband John; son Justin Peabody and wife Ashley; six grandchildren: Grayson, Brooklyn, and Oliver Reading; Henry Egan; Jack and Emma Peabody; brother Peter Peabody and wife Peggy, sister Sue Raimey; brother-in-law Ed Scruggs and wife Tina Peterson, brother-in-law Joey Scruggs, and many nieces, nephews, and extended family. An outdoor Memorial Service will be held at 10 a.m. on Saturday, January 16th at Heritage Presbyterian Church (14500 N Western Ave, Edmond, OK 73013). Donations may be made in honor of Gary to BeTheMatch.org or to the Leukemia & Lymphoma Society.

Gary was born in Arcadia, CA to James and Frances Peabody on September 7, 1955. Gary lived in California until he came to Oklahoma to attend physical therapy school at OU. He graduated from The University of Oklahoma in 1980 with a Bachelor... View Obituary & Service Information

The family of Gary Peabody created this Life Tributes page to make it easy to share your memories.

Gary was born in Arcadia, CA to James and Frances Peabody on...

Send flowers to the Peabody family.