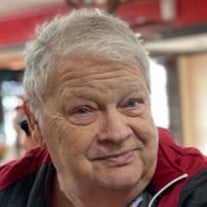 Gary Ellis Creager July 1, 1945 to November 17, 2020 In November 1951, George Creager wrote a letter to his mother, justifying the absence of writing to “being busy.” He went on to explain that he and Lucy were in hopes of adopting a “fine young boy by the name of Gary.” He wrote specifically, “this is a long story to which a finish cannot be written for a long time.” Fast forward nearly 70 years. We now have an end for the story. Gary was born in Ellensburg, WA on July 1, 1945 to Walter Zane and Eva Bernice Gee. About six years later, fate intervened and he was adopted by George & Lucille Creager. He never forgot his siblings, Sylvia and Junior. However, he would not reunite with them for more than 50 years. Gary grew up in Oklahoma City as an only child. He attended Nichols Hills Elementary School and John Marshall High School, class of 1963. He later attended the University of Oklahoma. In 1968, he married Sharon Bullock. To this union two daughters were born – his beloved Tracy Lee and Ginny Lu. In 1992, he left Oklahoma and began a decades long friendship with Ellen Verdel. They met in Texas. They lived in several states and traveled internationally to many countries. It was during one of these overseas stays that he met his love, Mary Ann. In 2013, he and Ellen moved back to the United States. In 2016, Mary Ann and her children, Angela and JP also moved to the United States. They were married later that year. Gary’s death was quite unexpected. We give our thanks to all the wonderful staff from Traditions Home Health & Hospice Care, who spent 4 full days caring for him. Gary had a larger than life personality. Donald Duck was his alter ego. He could talk like Donald and he knew every aspect of Donald Duck trivia. He was extremely intelligent and had a memory like an elephant. He never forgot anyone or anything. He loved to help people. It didn’t matter if he knew them or not. He loved many things and people throughout his life – baseball, OU football, cooking, TV sitcoms, The Lone Ranger, Scrabble, stuffed animals like Mel Moose, women in blue sweaters, his brothers and sisters whom he eventually reunited with over the years, and dogs. He loved dogs – especially his dog Pandy, affectionately known as Pandy Sue. He loved singing to people and singing with Mary Ann. Who really knows the second verse to “You Are My Sunshine” anyway? He loved all of his kids with every ounce of his heart. Once Angela and JP became his children, it was as if he had been given a second chance at fatherhood. He was fiercely protective of Angela. JP was the son he had never had. He was so proud. You would never have known that he once said he didn’t like children by the love he had for his grandchildren. He was always down for football trivia, going out to eat, slipping a little cash when no one was looking, letting some people drive (without a license), handing out compliments or telling a joke. Whatever it took to brighten their day. He laughed at his own jokes and we all laughed in the process. To say they brightened his days goes without saying – Jordan, Raven, Renae, Aaron, Riley, Rasaan, & Miah. The seven wonders of his world (in order of age, not height). He was smitten. Gary is survived by his wife Mary Ann, children Tracy (husband Alfonso), Ginny Creager, Angela Ganaden & JP Ganaden; his friend Ellen Verdel; his grandchildren, the seven wonders of his world; his dog Pandy Sue; and siblings – Sylvia Zane Strong, Junior Zane, Michele Ottmar, Robin Bishop, Dale Pryor, Susie Zane Reid, Gayle Zane Wilson, and Betty Zane Bechtel. He was predeceased by his parents, biological and adopted, his siblings Zachary Zane and Timi Zane as well as his beloved dogs Hot Shot, Chica Sue, Walter and BJ. Memorial service will take place on Monday, November 23 at 2:00 p.m. at Crawford Family Funeral Home in Edmond, OK. It will also be live streamed. Visitation will take place on Sunday, November 22 from 1-4 p.m. In lieu of flowers, please consider a donation to the Bella Foundation, a non-profit helping low-income pet owners afford medical care for their pets. You can donate directly at www.bellaspca.org.

The family of Gary Creager created this Life Tributes page to make it easy to share your memories.

Send flowers to the Creager family.