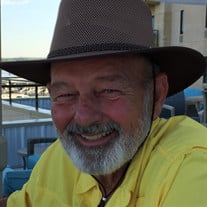 Gale Forrest Garvin Jr., 77, of Edmond, Oklahoma, passed away on Monday, Sept. 20, 2021, at his home, surrounded by his loving family after a hard-fought battle with Mycobacterium or MAC. Gale was born in Enid, Oklahoma, on Sept.13, 1944, as the third son to Gale Sr. and Letha Garvin of Bethany, Oklahoma. Gale met the love of his life, Carmel, in high school and they were married on Jan. 28, 1967. After being drafted to Vietnam, Gale joined the Navy and served this country proudly. Gale worked tirelessly in the restaurant industry while pursuing his dreams of becoming a high school shop teacher and salvage yard owner and attending Central State College in Edmond, Oklahoma. After graduating from Central State, Gale became a restauranteur and, over the years, was proud to serve his community out of many different kitchens. Gale was the Proprietor of Westoaks, Mac Henrys, Cinnamon’s, Chestnut Downs, and franchised several Sonic Drive-Ins. Gale was a true entrepreneur, restauranteur and jack of all trades, opening and running other businesses in and around Edmond. In retirement, he volunteered with the Shriners, transporting sick children and their families to hospitals in neighboring states. During their 54 years of marriage, Gale and Carmel welcomed three children – a son, Gale Forrest III, and daughters, Tiffany Lynn and Kimberly Dawn. Although he had a successful career, his biggest fulfillment in life was being a devoted husband, dad and probably most of all, a Papa. He loved to travel and enjoyed architecture, art, history, rebuilding classic cars, sporting the coolest Hawaiian shirts and dawning the perfect fedora. One of his many talents was cutting a really good deal. Gale could run a blackjack table all night and MacGyver just about anything. He was one of the good ones; really, the BEST! He would give anyone the shirt off his back. His favorite pastime was spent at the lake where he taught us the importance of toasting the world’s best sunsets and being grateful for every day. Cheers to you, Gale, and your next amazing heavenly sunset! We love you. Gale was preceded in death by his infant son, Gale III; his father, Gale Sr.; his mother, Letha; his brother, Jim of Hemet, California; his son-in-law, Eric Riggar of Edmond; and his beloved dog, Sabrina. He is survived by his wife, Carmel of Edmond; his daughter, Tiffany Riggar and John Thomas of Edmond; his daughter, Kim and husband Joe Weeks of Oklahoma City; his grandchildren, Ryan, Dalan, Davin and Lily Kate Riggar, James, Logan and Cole Thomas and Kemper and Jace Weeks. He is also survived by brother, Jim’s widow, Judy Garvin of Hemet, California; brother, Terry Garvin and wife, June of Blanchard, Oklahoma; sister, Joyce Hamilton of Broomfield, Colorado; and many nieces and nephews. Visitation will be held Sunday, Sept. 26, 2021, at 2:30 p.m. at Crawford Funeral Services, 610 N.W. 178th, in Edmond. Services will be held on Monday, Sept. 27, 2021, at noon at St. John the Baptist Catholic Church on Ninth and Boulevard in Edmond. In lieu of flowers, donations can be made to India Shrine of Oklahoma, 3601 NW 36th Street, Oklahoma City, Oklahoma.

Gale Forrest Garvin Jr., 77, of Edmond, Oklahoma, passed away on Monday, Sept. 20, 2021, at his home, surrounded by his loving family after a hard-fought battle with Mycobacterium or MAC. Gale was born in Enid, Oklahoma, on Sept.13, 1944, as... View Obituary & Service Information

The family of Gale Garvin Jr. created this Life Tributes page to make it easy to share your memories.

Send flowers to the Garvin family.