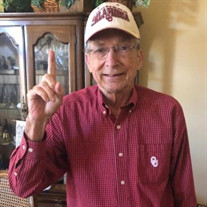 Frederick Leland Crawford II passed away on Thursday, May 6th, 2021 at the age of 75. Fred was born on December 7th, 1945, in Leesville, LA to Fred L. and Cleota Crawford. Fred grew up and attended school in Alva, OK although he and his parents moved to Woodward, OK for Fred’s senior year of high school. Fred graduated from high school in 1964 and then went to Oklahoma University. Fred enrolled in AFROTC at that time, as that was required for eligible males to not be subject to the military selective service draft. Fred graduated from OU in 1968 with a BBA and was also commissioned into the Air Force as a 2nd Lieutenant in July of 1968. Fred went on to serve our country for 22 years, rising to the rank of Lt. Col. Fred served in the Air Force in many capacities and in many locations. He served during the Vietnam War as a Navigator (B-52) for several missions over the period of the duration of that era. He earned the Vietnam Campaign Medal, the Vietnam Gallantry Cross with Palm, the Small Arms Expert Marksmanship Ribbon, AF Longevity Service Award Ribbon with four oak leaf clusters, AF Overseas Short Tour Ribbon, Vietnam Service Medal with two Service Stars, National Defense Service Medal, AF Recognition Ribbon, Combat readiness Medal, AF Organizational Excellence Award with one oak leaf cluster, AF Outstanding Unit Award with a “V” and one oak leaf cluster, AF Commendation Medal, Air Medal with eight oak leaf clusters, Distinguished Flying Cross, Meritorious Service Medal with three oak leaf clusters. Fred also served at the Pentagon in Manpower and Productivity, attended Air Command & Staff College at Maxwell AFB in Alabama, and was recognized by the Secretary of the Air Force as the #1 graduate. He then came back to OKC and was the Squadron Commander of the Recruiting Service Squadron at Tinker. He then went to Headquarter Recruiting Service at Randolph AFB in San Antonio. He served there; and then went to Lackland to serve as a Deputy Group Commander, then went back to Randolph. He served two years for Recruiting Service as the Inspector General. Fred retired from the Air Force on December 31st, 1990. Fred then decided to become a 7th and 8th Grade English Teacher and successfully did it for 14 years before retiring again in 2006-2007. Fred is survived by his wife, Kay Crawford, son Matt Crawford, daughter Courtney Knapp (Joe), grandsons Noah and Jacob Ellis, Peyton and Evan Lockridge, and Ryan Crawford. He is also survived by two sisters-in-law Glenell Bashore and Lindsey Marshall, along with many nieces and nephews, lots of friends, and his beloved dog, Cocoa, also known as Her Majesty. Fred was preceded in death by his parents Fred and Cleota Crawford, his sisters Sandra Schubert and Vicky Crawford, a nephew Jay Kaspadek, and a brother-in-law Col. (Ret.) John F. Bashore. A service celebrating Fred’s Life will be on Thursday May 13th, 2021 at Crawford Family Funeral Chapel (610 NW 178th St, Edmond, OK 73012) at 10AM with a small reception following the service in the Reception Room at the Funeral Home. In lieu of flowers please consider donating to https://action.lung.org/site/Donation2?df_id=42608&mfc_pref=T&42608.donation=form1&s_src=PaidSearch&s_subsrc=Brand&gclid=CjwKCAjw-e2EBhAhEiwAJI5jg4xYy17Lt2cA-Ox8qRyOqHDLWreOV90z6Uz1kFzJCL0rlk-20eiAFBoCqGAQAvD_BwE

Frederick Leland Crawford II passed away on Thursday, May 6th, 2021 at the age of 75. Fred was born on December 7th, 1945, in Leesville, LA to Fred L. and Cleota Crawford. Fred grew up and attended school in Alva, OK although he and his parents... View Obituary & Service Information

The family of Frederick "Fred" Leland Crawford II created this Life Tributes page to make it easy to share your memories.

Frederick Leland Crawford II passed away on Thursday, May 6th,...

Send flowers to the Crawford family.