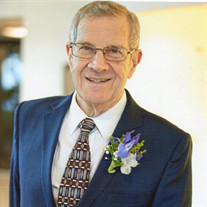 Fred Suhre Life Highlights CHILDHOOD • The firstborn of his devoted parents, he was named for his father and called Freddy by family and friends. • Full of energy as a child, he kept his parents and sister on their toes. • Enjoyed special times with grandparents, aunts & uncles & cousins & neighborhood friends. • Played baseball, basketball & took piano lessons. • Having a paper route at age ten taught him many lessons about hard work that lasted throughout his life. • Seemed proud of being sent home from school in third grade because of use of inappropriate words. When his grandchildren ended up in similar situations, he expressed how proud he was that they were carrying on the Suhre tradition! TEENS-COLLEGE • Traveled on many special family vacations. • A class clown, he loved making people laugh...even if it meant being sent to the principal's office. • A Vespa motor scooter at 13 gave him lots of adventures. • Made many friends at Taft Junior High and one that started his 68-year love affair. At one of the parties at a friend’s house, God “ordained” a game of “spin the milk bottle” that resulted in Fred and Nancy’s first kiss in eighth grade. He asked her to “go steady” at age 14; she was 13. • Becoming a Christian in March 1957 gave him a greater purpose and being involved with other teens in his church, school and community led to discipleship. • A good student and leader, he was selected as a Club 29 Junior Rotarian...and became a future member of the Club as a business leader for 15 years. • He was proud of his varied jobs: stocking at a local IGA grocery store, being a one-man overnight employee at Jim's Texaco, shoveling concrete for curbing for a construction company, assembling car air-conditioning units and working at the OU athletic department in various capacities from Friday night high school games, stenciling stadium seat, concessions, selling game day tickets, cleaning restroom and athletic dorm rooms, etc. throughout his four years at OU. Selling silverware sets by appointment didn't last long....learned sales was not his gift. YOUNG MARRIED • Married Nancy after freshman year in college • Had a daughter, Leslie, and son, Craig, before graduating at OU in 1962 with a bachelor’s degree in Business Administration and as a member of the Dean's Honor Roll • Joined Army ROTC program at OU because it paid $26 a week needed for groceries for his family; it included a six month (changed to two year) service commitment. • Received a Champlin Oil Company scholarship as a senior which allowed him to stay in school to graduate despite tight finances. • Served as Chief Advisor to the US Army Reserve Center in Baltimore for two years. CAREER IN HUMAN RESOURCES • Felt a responsibility to take care of employees, even though it often meant problem-solving with people in tears, at -Johnson & Johnson, Sherman, TX -Campbell Soup Company, Paris, TX -Fife Corporation, OKC -CMI Corporation, OKC -HTB, Inc., OKC - EMSA, OKC -Cain’s Coffee Company/Sara Lee Corp., OKC -Turner Brothers, Inc., OKC SERVICE • Board and Committee membership and leadership of Boards and Committees at -Rotary Club 29 -Visiting Nurses Association - Oklahoma City Beautiful -A Chance to Change -OKC Chamber Education Council -United Way of Oklahoma City -Allied Arts -Oklahoma City Personnel Association -National Management Association -Oklahoma Steel Fabricators -Oklahoma Safety Council -American Heart Association -Junior Achievement -Canadian Valley Vo-Tech Foundation -Francis Tuttle Vo-Tech Foundation -Oklahoma City Mayor’s Committee for the Handicapped -Westridge Hills Church of God/Belle Isle/Crossings Community Church FAMILY LIFE • Actively involved in church at Westridge Hills/Belle Isle/Crossings Community Church • Cheered for the OU Sooners, listening to games on the radio or TV • Loved to fish, golf and play raquetball • Experienced the struggle of leading a family through a member’s addiction; through God’s hand, found A Chance to Change, where the entire family learned about treatment and recovery • Enjoyed many special times with children and grandchildren, nieces and nephews and neighborhood children; he entertained all with humor and laughter; his face lit up at the sight of a child and he would strike up conversations • Handed out Tootsie Rolls to grandkids after each and every game, performance and school event he faithfully attended, accompanied with, “I love you and I am proud of you,” spoken to encourage them RETIREMENT • Seasonal trips to Rockport, TX, Grand Lake, New Mexico & Colorado with Nancy • Wanted to stay fit and exercised to be strong to do whatever God needed him to • Developed dementia and anxiety and received impeccable care and attention from Dr. David Fisher and the staff at Superior Care Homes of Oklahoma; grateful for caregivers with Senior Helpers, Heritage Point and Integris Hospice • Benefitted from marital counseling, experiencing the hard work and commitment marriage requires • Enjoyed the Men’s Bible Study at Johnnie’s • Shared his wisdom through “sermonettes” at family gatherings • Shared the importance of faith and trust in God with family, neighbors, painters, yard maintenance workers and others • Prayed articulately and with an amazing sense of inclusion & awareness even as his dementia progressed • Said most everything he experienced was “the best”, valuing the present situation, including desserts he had tasted many times before, sunsets, weather and even Christmas during the pandemic when family could not gather as they ordinarily would • Expressed gratitude to caregivers and anyone who came to visit even in his last days • Instead of flowers, wanted to be remembered with gifts of love to a child or children to improve their lives *Services will be made available via livestream here on Fred's tribute page, just prior to services beginning, Friday morning.* https://vimeo.com/693658415/ea5edfa279

Fred Suhre Life Highlights CHILDHOOD &#8226; The firstborn of his devoted parents, he was named for his father and called Freddy by family and friends. &#8226; Full of energy as a child,... View Obituary & Service Information

The family of Fred Harold Suhre Jr. created this Life Tributes page to make it easy to share your memories.

CHILDHOOD
• The firstborn of his...

Send flowers to the Suhre family.