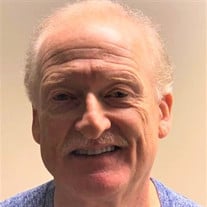 Frank Thomas Koch, 63, of Edmond, Oklahoma passed away at his home on October 14, 2019. Frank was born March 3, 1956, in Detroit, Michigan to Jacob and Margaret VanMarter Koch and was one of two children. The family moved to Romulus, Michigan when Frank’s Dad became Police Chief. Frank graduated from Romulus High School in 1975. While in Romulus, Frank enrolled in Karate Schools of America where he achieved a black belt rank. He then began working at the school as a teacher and became a Manager there. He later used these skills to teach self defense at the Oklahoma City Police Academy. After the deaths of his Dad and brother, Frank headed to Oklahoma City in 1978. He followed in his Grandfather’s, Dad’s and brother’s footsteps by becoming a police officer at the Bethany, OK Police Department in 1980 where he served until he joined the Oklahoma City Police Department on September 4, 1987, as a member of Class 100. After completing the FTO program, Frank was assigned to Central Division, second shift. When the Springlake Briefing Station opened, he moved to that division and remained there several years. During that time, he also served a lengthy temporary assignment to Special Projects. While working at Special Projects, he received two commendations for his work as an undercover officer. In 1995, Frank worked at the Alfred P. Murrah Building bomb site, sometimes 18-20 hours per day, where he cleared rubble and searched for and recovered victims. He started working at the site the day after the bombing and worked until the last victim was recovered. He was one of only two people that worked at the site for that period of time with no days off. He was so honored to have been able to do that work for all the families. Frank transferred to Santa Fe Division Dayshift around 2003 where he served until he retired on December 21, 2006. In 2008 Frank moved to gorgeous Montana, just minutes from Glacier National Park. He spent his time fly fishing, golfing, and motorcycling. A friend said he had never seen anyone take to retirement better than Frank. He lived there almost 11 years then returned to Edmond, Oklahoma in January 2019, where he enjoyed playing lots of golf. Frank is survived by his wife Diane, his son Jacob “Jake” Koch, his daughter, and many cousins, nieces and nephews. Services to remember and celebrate Frank's life will be held Wednesday, October 23, 2019, at Crawford Family Funeral Service in Edmond, OK at 2:00PM. A come-and-go visitation will be held the day prior, Tuesday, October 22, 2019, from 12:00PM-8:00PM, with the family of Frank being present from 6:00PM-8:00PM.

Frank Thomas Koch, 63, of Edmond, Oklahoma passed away at his home on October 14, 2019. Frank was born March 3, 1956, in Detroit, Michigan to Jacob and Margaret VanMarter Koch and was one of two children. The family moved to Romulus, Michigan... View Obituary & Service Information

Send flowers to the Koch family.