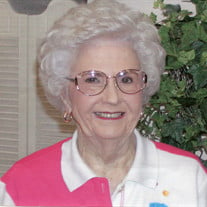 Not sure what to send?

Florine Hatley Shirley was born March 12, 1919, in Hoxie, Arkansas, the youngest of four children of Eli and Emma Hatley. She survived a tornado which claimed the life of her sister Louise in 1927. The family moved to Oklahoma City soon after that and weathered the Great Depression there. Florine graduated in 1936 from Central High School, where she met Orvil Shirley, whom she married in 1938. They shared 65 years of marriage before his death in 2004. They raised two sons, Steve and Larry, born in 1944 and 1948. She and Steve spent part of WWII on the Shirley family farm near Yukon, OK, while Orvil served in the U.S. Army in the Pacific. The family moved to Edmond, OK, in 1951, when Mr. Shirley went into business there. Florine has resided in Edmond for the past 71 years. Her mom was a legendary cook who never needed a recipe, leaving Florine to figure out how to become a legendary cook in her own right. She excelled at family gatherings, holiday celebrations, Sunday dinners, many family camping trips, and an especially remarkable series of complete Thanksgiving dinners served from the trunk of a Buick, so as to facilitate family quail hunts in the 50's and 60's. She attributed her long life to good genes, exercise, and a glass of champagne every afternoon at 4:00; though in all fairness, she didn't start the champagne tradition until her late 80's, when some doubters might have thought her to already be old. Florine and Orvil were longtime members of the First Christian Church of Edmond, with many good friends among the congregation. She and Orvil enjoyed more than 50 years together as part of the Edmond community during its growth from small town to the present busy city. Florine was preceded in death by her parents, her sister Louise, brothers Don and Rusty, husband Orvil, son Steve, nephew Jim Erdman, and many church and community friends, as well as all the other members of an informal club of close women friends forged in high school and in frequent contact with one another for home meetings, travel, and all manner of important life events for more than 70 years. She leaves behind her son Larry Shirley and wife Cheryl; daughter-in-law Wanda Shirley; grandchildren Stephanie Post and husband Russell, Casey Shirley and wife Sharla, Jeff Shirley and wife Caroline Laco, and Elizabeth Shirley Wolford and husband Matt; great grandchildren Hatley and Audrey Post, Khorey and Eli Shirley, and Sloane Isabelle Wolford; niece Jerilyn Palmer and nephews Don Hatley and Jon Hatley. Special thanks to Mark Mades and Linda Speegle, longtime friends and supporters since their own childhoods in Edmond; Hulda Hamilton, who has been a friend, Sunday school classmate, and kind supporter since the family arrived in Edmond in 1951; Suzanne Harlow, who helped her tune up her appearance every Thursday for over 30 years; Shirley White, a very special friend and caregiver for several years, and the staff at Valir Hospice, especially Kesha Hall and Jessie Sikich, who have helped keep Mom safe, comfortable, and pretty for the past year while assisting her in her final months. After 103 years of family, friends, mostly excellent health, a few hardships, much happiness, and outliving almost everyone, Florine passed away peacefully among family at home on May 12, 2022. She maintained until the end that she was not a day over 98 and never understood why the Oklahoma Centenarians kept sending her birthday cards. The family assumes she is arguing her case with higher authorities now. Thanks to all who have shared in her long journey. A graveside service celebrating of Florine's life will be at 10:30am on Friday, June 10, 2022, at Memorial Park Cemetery.

Florine Hatley Shirley was born March 12, 1919, in Hoxie, Arkansas, the youngest of four children of Eli and Emma Hatley. She survived a tornado which claimed the life of her sister Louise in 1927. The family moved to Oklahoma City soon after... View Obituary & Service Information

The family of Florine Shirley created this Life Tributes page to make it easy to share your memories.