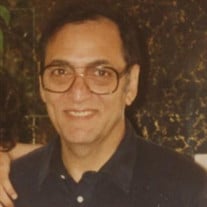 Farris Badry went to be with the Lord on Jan. 11, 2022. He was two weeks away from turning 85 years old. He was born on Jan. 25, 1937, in the west Texas town of Slaton, in Lubbock County. When he was a few years old, his parents, Sam Badry and Mary Adell Yuzbick Badry, moved the family to Norman, Okla. He was preceded in death by sisters Freda Grogg and Selma Badry, and brother Jamall Badry. His sister Elizabeth Todd lives in Norman, Okla., and brother Jimell Badry resides in Moore, Okla. with his wife Carolyn. Living in Norman led Farris to become a devout fan of the Oklahoma Sooners, particularly the football team. He attended a few games as a youth and remained a fervent fan for the remainder of his life. He was also an avid New York Yankees fan and was elated to attend a Yankees home game a decade before his passing. Farris was a superb bowler, with an average of over 200 in league competition. He played both sides of the line on his junior high and high school football teams. A natural athlete, Farris was an excellent softball pitcher with church leagues and loved watching OU's softball team play and win championships. Memorization of Bible verses, including entire chapters and books, was an outstanding gift of Farris's, as was salesmanship. In the clothing stores at which he sold menswear, he consistently led in sales volume. Farris married the love of his life, Patricia Edsall of Watonga, Okla., in September of 1982. He was a very loving man, gregarious, a gifted storyteller, and never reluctant to initiate a conversation with a total stranger. Along with college football and softball, Farris loved nothing more than good barbeque. He was very fond of chicken-fried steak, and his sisters' cherry cheesecake. Dining out and going to breakfast with friends from his Sunday School class were among his very favorite activities. Farris is survived by sons Allen and John, grandsons Ryan and Logan, and great grandchildren Kaylee, Elijah and Kelsie. He is also survived by stepchildren Stephanie Tolle of Hudson, New York and Christopher Edsall of Oklahoma City, Okla., and four step-grandchildren. His funeral service was at Quail Springs Baptist Church in Oklahoma City, where he was a member since 2009. A graveside service was at 1.0.0.F. Cemetery in Watonga, Okla.

Farris Badry went to be with the Lord on Jan. 11, 2022. He was two weeks away from turning 85 years old. He was born on Jan. 25, 1937, in the west Texas town of Slaton, in Lubbock County. When he was a few years old, his parents, Sam Badry... View Obituary & Service Information

The family of Farris Badry created this Life Tributes page to make it easy to share your memories.

Send flowers to the Badry family.