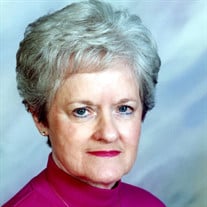 Evelyn Louise Medders of Edmond, Oklahoma, was born November 9, 1934 in Clinton, OK to Mary E and Ellis G. Smith. She graduated from Clinton High School in 1952 as Valedictorian of her class. During her time in Clinton she was involved in many activities, was president of her social club, winner of the Science Award, DAR award, and received a scholarship to Oklahoma State University. At OSU she was member of Kappa Delta Sorority, Alpha Pi Mu Medical Fraternity, and the President’s Honor Roll. In 1954 she married the love of her life, La Rue Medders, her high school sweetheart. She changed her major from Pre-Med and they moved to Norman where she attended the University of Oklahoma. She graduated from OU with a degree in Medical Technology and was a member of Phi Beta Kappa. After a year’s internship at the out OU Medical Center in Oklahoma City, Evelyn worked in Clinical Chemistry at the Medical Center until she became a mother. She then chose to work with La Rue for Lloyds, New York Insurance Company so she could focus on nurturing her family, especially her two children, David Ellis, and Diane Elizabeth. She was active in her children’s schools, was president of the PTA, did math tutoring for adult education at Opportunities Industrialization Center for many years, taught Sunday School, and spoke to various civic groups with the Panel of American Women. She and her husband were part of Thirty Families, a group in the 60’s who were actively working for the improvement of communication and understanding between the races in Oklahoma City. While their children were young, the family was able to take many trips across the United States and Canada and had many good times together. She and La Rue were also able to travel to Europe, Hawaii, Canada, Mexico, and Alaska. After their children were grown, she and La Rue were the principal caretakers for her parents and her aunt and uncle, Billie and Harry Davis, until their deaths. Evelyn is preceded in death by her husband of 61 years, La Rue, her beloved family members, her wonderful friends, Crystil Jeck and Doctor Frances Felton, who were godmothers of her children; an aunt and uncle, Helen and Turner Morgan; cousin, Warren Morgan, and Bobby King of Clinton. Survivors include son, David and his wife, Paula of Frisco, Texas; daughter, Diane and her husband, Brion, of Norman, cousins Carol Rollo and her husband, Michael, of Pensacola, Florida; and Wilma Parr of Arapaho. Evelyn requested no public memorial service and asked that family and friends share memories and love with one another. In lieu of flowers, she asked for donations to the Foundation for Peripheral Neuropathy https://www.foundationforpn.org/ or Opportunities Industrialization Center of Oklahoma County, Inc., https://oicokc.org/donate/ The family will have a private service to lay La Rue and Evelyn to rest in Arapaho, OK.

Evelyn Louise Medders of Edmond, Oklahoma, was born November 9, 1934 in Clinton, OK to Mary E and Ellis G. Smith. She graduated from Clinton High School in 1952 as Valedictorian of her class. During her time in Clinton she was involved in many... View Obituary & Service Information

The family of Evelyn Louise Medders created this Life Tributes page to make it easy to share your memories.

Send flowers to the Medders family.