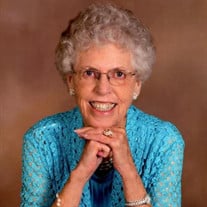 Esther was born August 6, 1930 in Los Angeles, California. Esther married Willis Brown in Elmonte, California on May 12, 1949. They were married for 57 years before Willis passed away. Willis went to college and Esther wanted to get a job to help support them so she began working at Fedco Department Store. She began by washing dishes. She worked there for 22 years and through various promotions was the Manager of Customer Service when she quit. Esther was a member of Edmond First Church of the Nazarene and was always an active member in her church community. Through the years she served in many ways including Sunday School Secretary, Teen Missionary Chapter Sponsor, Missionary President, Sunday School teacher, Children’s Junior Church leader and many others. Esther was a wonderful cook and baker. Her pies were famous for raising money at the Church Dessert Pie Auction. Esther came August 8th, 2010 to make her home with Charlie and Sharon Parkhurst. She was truly a part of their family and chose to stay with them until the end. Esther loved her massages with Ann Bundrick and looked so forward to the day she would spend with Doyle and Ann. Esther was preceeded in death by her parents, Earnest and Anna Esther, her husband Willis, and her three brothers, Roy, Paul and Walt. She is survived by one brother John, 2 sons Marvin and Charles Brown, 2 granddaughters, Lisa and Carrie, and 3 great grandchildren. She leaves behind special friends, Charlie and Sharon Parkhurst, and numerous others. Esther was well loved! A funeral service will be held to remember and celebrate Esther's life on Friday, January 15, 2021 at 2:00PM at Edmond First Church of the Nazarene. Visitation will be held one hour prior to services beginning at the church. Burial will take place immediately following services at Gracelawn Cemetery in Edmond. A link for viewing services Friday, may be found below. Service Recording: https://youtu.be/sGR_qdbvJzg

Esther was born August 6, 1930 in Los Angeles, California. Esther married Willis Brown in Elmonte, California on May 12, 1949. They were married for 57 years before Willis passed away. Willis went to college and Esther wanted to get a job... View Obituary & Service Information

The family of Esther Brown created this Life Tributes page to make it easy to share your memories.

Send flowers to the Brown family.