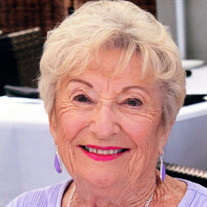 Ellen Catherine Maier Ketter, 95, was born July 6, 1924 in Buffalo, New York and ascended to heaven the afternoon of February 19, 2020 at her home in Edmond, Oklahoma, surrounded by her devoted husband John E. Henry and family. She was survived by her five children, who were her greatest pride and accomplishment: Donald J. Ketter, Jr. (Catherine) of Edmond, Oklahoma; Ellen Ketter (William Donovan) of Carlsbad, California; Francis T. Ketter (Nancy) of Knightstown, Indiana; Rosanne Ketter-Hanna (William) of San Diego, California; and Coralie Anderson (Donald) of Naples, Florida. She was blessed with nine grandchildren and thirteen great-grandchildren who called her Sissy. Ellen loved them all dearly and shared her talents and hobbies with them, often sending home- baked treats, hand-knit blankets, and beautifully penned cards and letters. Ellen was predeceased by her parents Ellen Reid, affectionally called Nellie, and Theodore John Maier, known as Bumpa, and her three siblings, Theodore J. Maier, Jr., Patricia A. Maier Kader, and Thomas Aquinas Maier. Ever trying to learn more about the world around her, Ellen was a dedicated student, graduating from Sacred Heart Academy in Buffalo in 1937. She went on to attend St. Mary’s Business School where she met Donald Joseph Ketter at the age of 17. She was love struck, and they married on January 2, 1946. Mr. Ketter, a decorated World War II veteran, and Ellen raised their five children together in New York. In addition to raising five children, she became an avid pianist and accomplished artist. She always maintained deep friendships and continually acquired new friends throughout her life – too numerous to mention here by name. Ellen had an immense thirst for knowledge, and after raising her children, Mr. Ketter encouraged her to return to school. While in her fifties, she obtained a degree in Elementary Education from D’Youville College in Buffalo, New York, so she could become a teacher. After living in East Aurora for 22 years, she and Mr. Ketter moved to Florida in 1980, and they resided in Fort Myers, Florida together until Mr. Ketter passed away in 1983. Ellen looked for ways to give of herself to others, volunteering for Catholic Hispanic Social Services from 1990 until 2003, teaching English to Spanish speaking families. It was in Fort Myers that she met her second husband, John Henry, who lovingly adored her for the remainder of her life. They lived their thirty years together fully, taking up dancing lessons, pursuing their hobbies and interests, and making friends wherever they went. In 2004, Ellen and Mr. Henry moved to Phoenix, Arizona; and in 2018, she and Mr. Henry relocated to Edmond, Oklahoma. Ellen had myriad positive attributes, but the inspirational mark she left on this world was the great kindness she bestowed on everyone who crossed her path – a spirit that is not best captured in words but in the cherished memories we have of her beautiful smile and tender touch. A private Requiem Mass will be held at St. John the Baptist Catholic Church in Edmond, Oklahoma at the convenience of the family. In lieu of flowers, memorial donations may be made to hospice or to a charity of the donor’s choice.

Ellen Catherine Maier Ketter, 95, was born July 6, 1924 in Buffalo, New York and ascended to heaven the afternoon of February 19, 2020 at her home in Edmond, Oklahoma, surrounded by her devoted husband John E. Henry and family. She was survived... View Obituary & Service Information

The family of Ellen Ketter created this Life Tributes page to make it easy to share your memories.

Send flowers to the Ketter family.