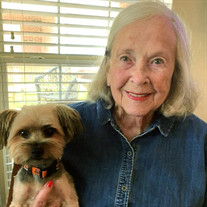 Her journey began November 26, 1933 in Walters, Oklahoma. Born to James A. Ballard, the fire chief and postmaster and Gladys Gilbreath Ballard, a homemaker. Ann passed away on November 12, 2020 at her home in Oklahoma City at Village on the Park retirement home at Kingsridge Avenue. Inurnment will be at 10 a.m. on Wednesday, November 18, 2020 at Fort Sill National Cemetery in Elgin, OK. Ann will be reunited with her beloved husband Jim. They will be together forever, and always in our hearts. Services are under the direction of Crawford Family Funeral Services, Edmond. Ann graduated from Lawton High School in 1951 and completed her Associate Degree at Oklahoma State University in 1953. She was a beauty queen for several organizations. It was at Lawton High School where she met the football linebacker, Jim Hodge, and fell deeply in love. She married the love of her life, James L. Hodge on August 7, 1953. They had “two” at twenty-two, James M. Hodge and Kimberle A. Hodge. Kristin L. Hodge followed 13 years later. She worked for FAA, as a dental associate and secretary at Ft. Sill, in addition to being a mom. Ann’s husband, Jim, served 26 years in the U.S. Air Force from 1953 to 1979. Consequently, she served too, as an Air Force wife. They were stationed throughout the United States and abroad including tours of duty in Alabama, Georgia, Texas, Florida, Washington DC, Oklahoma & Guam. While her husband did a tour of duty in Thailand during the Vietnam War, she, like many military wives, managed by herself returning to her hometown, Lawton, OK to raise the children. Ann loved and adored her husband Jim very much. They spent many wonderful years together, until Jim had a stroke, and Ann became his primary caretaker for many years before his passing in February of 2017. Ann was an avid golfer and OSU fanatic. She enjoyed being on the golf course and looked forward to playing as much as she could. Ann even managed to make a Hole-in-1! She loved cheering for her OSU Cowboys football team. She and her family loved boating, water skiing and camping with friends. She never missed an opportunity to tell a joke or help a neighbor. Ann loved her 7 grandchildren and hosted many holiday & birthday dinners. She would make friends anywhere she went and was loved dearly by everyone who got to know her. Ann also enjoyed playing dominos and Bridge with her friends and neighbors. She is survived by their 3 children, Kim Allen, Kris Hoyt and Mike Hodge; Seven grandchildren, Christopher Hodge, Cody Hodge, Daniel Allen, John Allen, Zac Corrales, Kasady Corrales and Micah Corrales, and 1 grandbaby, Jax Pulley.

Her journey began November 26, 1933 in Walters, Oklahoma. Born to James A. Ballard, the fire chief and postmaster and Gladys Gilbreath Ballard, a homemaker. Ann passed away on November 12, 2020 at her home in Oklahoma City at Village on the... View Obituary & Service Information

The family of Elizabeth Ann Hodge created this Life Tributes page to make it easy to share your memories.

Send flowers to the Hodge family.