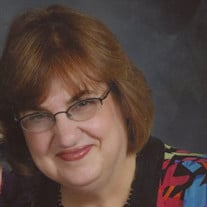 Elaine Gayle Hayes-Barton of Edmond, Oklahoma passed away peacefully on Sunday, February 27th, 2022. She was born on March 10th, 1954, at Perry Hospital in Orlando, Oklahoma, and graduated from Mulhall-Orlando High. She married the love of her life, James (Randy) Barton in April of 1992. She then went on to achieve her bachelor’s at Southwestern State University, and then went on to get her master’s degree at the University of Central Oklahoma. She taught Music for a brief period, then worked many years managing and then on to retiring with Hancock Fabrics in Oklahoma & Texas. After retiring from the corporate world, she then fulfilled her life motto “Sewing is my Therapy.” She assisted experienced and new quilters in Quilt Shops in Oklahoma & Texas where she left a major impression on quilters young and old. She also enjoyed attending quilting activities around the state and region where she gained many friends. She was an active choir member at Heritage and Vista Ridge United Methodist Parishes in Texas, and Chapel Hill United Methodist in Oklahoma City, Oklahoma where she was also an active member of Holy Hands Sewing Guild. Elaine is survived by husband James (Randy) of the home, mother-in-law Rhonda, sister Connie and husband Win Guthrie of Stillwater Oklahoma, nephew Daniel and wife Pam along with grandniece Lauren of Stillwater, brother Keith and wife Mary Hayes of Orlando, Oklahoma, son Eric and wife Alison, along with son Tucker, daughter Amanda and husband Clayton, along with their son Chisum. She is also survived by her beloved rescue dog, Spike. In lieu of flowers, donations may be made to Holy Hands Guild c/o Chapel Hill United Methodist Church 2717 W. Hefner Rd, Oklahoma City, OK 73120.

Elaine Gayle Hayes-Barton of Edmond, Oklahoma passed away peacefully on Sunday, February 27th, 2022. She was born on March 10th, 1954, at Perry Hospital in Orlando, Oklahoma, and graduated from Mulhall-Orlando High. She married the love of... View Obituary & Service Information

The family of Elaine Gayle Hayes - Barton created this Life Tributes page to make it easy to share your memories.