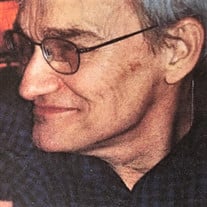 Edward Eric Eaton was born April 3, 1936 in Flint, Michigan. He died on March 14, 2021 in Edmond, Oklahoma. Dr. Eaton attended the St. Michaels School and Central High School in Flint, Michigan. Eaton served in the U.S. Air Force from 1954 to 1956. He received his B.A. (1961), M.A. (1962), and Ph.D. (1970) in Comparative Literatures from the University of Michigan; and he received a B.S. (1983) in Computer Science from the University of Central Oklahoma. From 1962 to 1971 Eaton taught in the English departments of the University of Michigan and Eastern Michigan University. He taught in the English department in the University of Oklahoma from 1971 to 1978; and he taught in the Computer Science Department of the Business School of the Oklahoma City University from 1983 to 1984. From 1984 to 1987 Eaton worked as an information systems manager in the Oklahoma DHS. From 1987 to 1990 he was a senior systems analyst with Lockheed Martin Corporation, working as a project leader for NASA at the Johnson Space Center Test Facility in the White Sands Missile Range in New Mexico. From 1990 to 1998, he held positions in various state and federal projects as a Director and project manager with MAXIMUS Inc. of Reston, Virginia; and in 1999 he worked as a senior project manager with the IBM Corporation. In 2000 Eaton worked as a management consultant in a telecommunications project in North Los Angeles, California. In 2001 Eaton retired, but he soon returned to part time college teaching in 2003. In 2006 he held the position of lecturer in the Film and Video Studies Program in the University of Oklahoma. Eaton was preceded in death by his wife, Marina Eaton; his mother, Audrey (Eaton) Craig; his father, George Eaton; his step father, Charles Craig; and his brother, Christopher Craig. Survivors include his wife, Laurel Eaton of Edmond; his brother, Thomas Eaton of Sarnia, Ontario, Canada; his sons Gregory Eaton of Oklahoma City, Eric Eaton of Ann Arbor, and Alexander Eaton of Astoria, New York. Because of his love for all kinds of animals, it is requested that donations be made in memory to Edward Eric Eaton to Free to Live, Edmond, Oklahoma (freetoliveok.org), or any animal rescue organization.

The family of Edward Eric Eaton created this Life Tributes page to make it easy to share your memories.

Send flowers to the Eaton family.