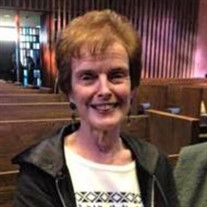 Edith Francis Thompson October 3rd, 1932 to January 6th 2021. Fourth of 6 children of Robert and Lilian Mahaffey. She was the beloved wife of Rev. Mackenzie "Mac" Thompson, who preceded her in death. She was also a sibling, mother, and grandmother. She passed on January 6th, 2021, following months of mental decline, in a Covid treatment facility. Edith was born in Broken Arrow, Oklahoma and graduated high school in 1950. She married the same year to Mac Thompson who became a Methodist minister. They served many communities in Oklahoma including Jenks, Blanchard, Enid, Midwest City, The Village, Sand Springs, and OCU. Edith worked at Union Equity in Enid and held a long career at Prudential Insurance Company, as well as working for Rev. Doug McPherson and Rev. Bill Henry at the Oklahoma United Methodist District Superintendent offices. She was a long time volunteer at Skyline Urban Ministry. Edith was fiercely loyal, an advocate for justice, stubbornly independent, and generous to those causes she believed in and people she loved. She was raised on a farm but was elegant and cultured. She was never a typical pastor's wife, mother or spouse, but was a unique and redemptive presence in all aspects of her life. She loved to read, play games, interact with the people she cared for, partake in slightly rebellious behavior, and laugh. She spoke in fluent sarcasm and was known to speak harshly of people and ideas she found abhorrent. She leaves a huge hole in the lives of her children, grandchildren, friends, in-laws and sibling. To those who cared for her, she was a bright light, and the world is a little darker with her passing. Edith is survived by her brother Jim Mahaffey and his wife Sally, three children, Jerry and wife Kathy Thompson, Jack and wife Ann Thompson, Cindy and husband Tom Krone, 6 grand children, Edie Krone, Thomas and wife Sabrina Krone, Alan and wife Dannah Krone, David and wife Lawren Krone, Drew and wife Amy Thompson, Blake and wife Lauren Thompson, and 11 great grandchildren. A virtual service will be held to remember and celebrate Edith’s life on Saturday, January 23, 2021 at 2:00PM. Those wishing to view, may do so at https://www.facebook.com/mosaicokc/ or by visiting here on Edith's tribute page.

Edith Francis Thompson October 3rd, 1932 to January 6th 2021. Fourth of 6 children of Robert and Lilian Mahaffey. She was the beloved wife of Rev. Mackenzie "Mac" Thompson, who preceded her in death. She was also a sibling, mother, and... View Obituary & Service Information

The family of Edith Thompson created this Life Tributes page to make it easy to share your memories.