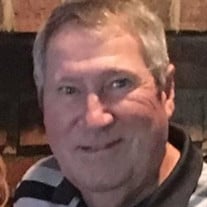 Earnest Roland Treat was born at Holdenville, OK, on November 27, 1943, to Rachel Janet Blackburn Treat and Earnest Franklin Treat. He graduated from Stillwater High School in 1962 and went on to receive both B.S. and M.S. degrees from Oklahoma State University. His first marriage to Mary Beth Grant produced his amazingly wonderful daughter Erica Dawn. In 1980 he married Ruth Risinger Wright. As a kid he worked for the Stillwater News-Press beginning as a news carrier and resigned as the Circulation Promotion Director. He pursued a second career as a counselor and eventually served as Director of Starting point il in Stillwater from 1982 to 2001. When Ruth's work took them to Bryan-College Station, TX, he became a golf bum. And even got another hole-in-one! Gained lots of new golf pals and loved them all-new and old back in Oklahoma. Roland enjoyed many sports...golf, racquetball, baseball, wrestling, softball, tennis, bowling, and fishing. He knew every fishing hole around Stillwater. He is grandfather to four happy grandkids: lan and Olivia Treat-Alvarez and Wyatt and Destry Pereira. Erica, her husband Russell, and the two "littles" live in Stillwater. Roland will be remembered by those close to him as a good, caring, and honest person. He was always a loyal friend, loving husband and father, and proud brother. He was a devout OSU Cowboy fan and his dogs' and cats' best friend. He will be dearly missed here on earth. May he rest in peace as he awaits a grand reunion at Rainbow Bridge and in Heaven. Roland and wife Ruth are true believers and members at Woodcrest Baptist Church in Guthrie, Оқ. He was preceded in death by brothers Wayne Treat and Ray Treat, one sister Lori Treat Farmer, his father Earnie Treat, and mother Rachel Janet Treat. Survivors include his wife Ruth; one sister, Denise Treat Speer, of Stillwater; daughter Erica and her family of Stillwater, and a host of nieces and nephews and cousins from around Oklahoma and beyond. Memorials may be made to your local Hospice or your local animal shelter.

Earnest Roland Treat was born at Holdenville, OK, on November 27, 1943, to Rachel Janet Blackburn Treat and Earnest Franklin Treat. He graduated from Stillwater High School in 1962 and went on to receive both B.S. and M.S. degrees from Oklahoma... View Obituary & Service Information

The family of Earnest "Roland" Treat created this Life Tributes page to make it easy to share your memories.

Earnest Roland Treat was born at Holdenville, OK, on November...

Send flowers to the Treat family.