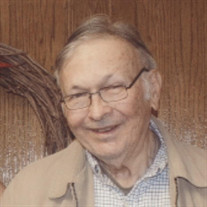 Allen Douglas “Doug” Meese, 82, passed away December 21, 2019 in Norman, OK. His sweet smile and kind heart will be missed by all who had the fortune to know him. Allen Douglas Meese was born in Amarillo, TX on March 7, 1937 to Kay Kile Meese and Sadie Frances Abernathy Meese. Doug graduated from Enid High School in 1954, and attended the University of Oklahoma, where he joined Lambda Chi Alpha fraternity, was commissioned into the Army ROTC, and earned his B.S. in Physics in 1958. Upon graduation, he attended the University of Arizona in Tucson where he earned his M.S. in Electrical Engineering. Doug then completed U.S. Army Officers Training School and served in the U.S. Army where he was promoted to the rank of Captain and worked as an instructor until 1964. He met Nancy Kirtley in Enid, OK in 1964 and were married on July 24, 1965. He and Nancy moved to Ponca City, OK where Doug worked at Continental Oil Company before moving to Garland, TX where Doug earned a Professional Degree in Engineering from Southern Methodist University in 1967. Doug worked in the oil business both in Enid with his dad and brother at Meese Petroleum Company and in Oklahoma City at Meese and Hancock, and afterward as a petroleum and environmental consultant. He retired in 2014 from the State of Oklahoma Environmental Department Division of Air Quality, where he had many co-workers he counted as friends. Shortly after retirement, Doug moved to Norman during which time he lived in the Rivermont Community, where he loved and was beloved by both staff and residents. The family wishes to extend heartfelt thanks to the staff of Rivermont Independent Living and Rivermont Gardens Assisted Living, LifeSpring Home Health, Sooner Dialysis, and Bridges Skilled Nursing at Grace Living Center for the care and affection shown to Doug while residing in Norman. Survivors include a brother, Steve Meese of Frisco, TX; three children: Mary Jane Meese of Oklahoma City, OK; Elizabeth Ann (Betsy) Sieck and husband Chris of Norman, OK; and Kirtley Allen Meese and wife Candace of DeForest, WI; and seven grandchildren: Sadie, Sam, and Lucy Sieck of Norman, OK and Megan, Lauren, Owen, and Kaitlin Meese of DeForest, WI. A come-and-go visitation and reception will be 5-7pm on Thursday, December 26th at Crawford Funeral Service in Edmond. A service celebrating Doug's life will be at 2pm on Friday at Crawford Funeral Service with burial following at Gracelawn Cemetery in Edmond. In lieu of flowers, the family asks that donations be made to the Alzheimers Association at alz.org.

The family of Doug Meese created this Life Tributes page to make it easy to share your memories.

Send flowers to the Meese family.