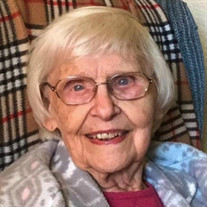 Dorothy Louise Stevenson, 93, died Sunday, February 21st, 2021 at Lyndale Assisted Living in Edmond, OK with her daughter, Cathy, at her side. Dorothy was born on July 19, 1927 to Joseph A. and Dorothy Eilerman Moss in Richmond, Indiana, where she resided until 2017 when her health required a move to Edmond, Oklahoma to be near her daughter. She was a 1945 graduate of Richmond High School. After high school she worked for Richmond Baking Company until marrying James Stevenson in 1949 and starting her family, eventually becoming co-owner and bookkeeper at Stevenson Printing Company and then Stevenson Photography, before retiring in 2009. Dorothy enjoyed traveling with her husband, Jim – especially to see her children, grandchildren and great-grandchildren, who were a real joy to her! In her free time, Dorothy (known as “Dot” to her many friends and “Aunt Dot” to her nieces and nephews) enjoyed bowling for many years, sewing, crafts, playing cards, and working Sudoku puzzles. She was a life-long parishioner of St. Andrews Catholic Church until becoming a charter member of Holy Family Catholic Church, where she attended until her move to Oklahoma. Survivors include daughter Catherine (James) Overturf, Edmond, OK, one granddaughter Alyson (Rick) Burkhardt; five grandsons, Craig (Gretchen) Stevenson, Chad Stevenson, Chris Stevenson, Justin Overturf, Jonathan (Shandi) Overturf; Great-Grandchildren, Sydney, Kaitlyn, Connor, Logan and Bradley Stevenson, Makenna and Raelin Overturf, Jaxton, Brezlyn and Hailey Burkhardt, nieces and nephews. She was preceded in death by her husband of 65 years, James. R. Stevenson, daughter Linda, son James Jr., daughter-in-law Darlene, parents and sister, Lucille Toschlog. A memorial visitation for Dorothy Louise Stevenson will be from 12:00 to 2:00 p.m. Friday, April 16, 2021, at Doan & Mills Funeral Home, 790 National Road West, Richmond. Memorial service will follow at 2:00 p.m. Friday, April 16, 2021, at Doan & Mills Funeral Home with Fr. Sengole T. Gnanaraj officiating. Please plan to wear your own mask in the funeral home. Burial will be in St. Andrew Catholic Cemetery. In lieu of flowers, memorial contributions may be made to: Dementia Society of America, P.O. Box 600, Doylestown, PA 18901 or online at www.DementiaSociety.org/donate or St. Elizabeth Ann Seton Parish, 240 South 6th Street, Richmond, IN 47374.

Dorothy Louise Stevenson, 93, died Sunday, February 21st, 2021 at Lyndale Assisted Living in Edmond, OK with her daughter, Cathy, at her side. Dorothy was born on July 19, 1927 to Joseph A. and Dorothy Eilerman Moss in Richmond, Indiana, where... View Obituary & Service Information

The family of Dorothy Stevenson created this Life Tributes page to make it easy to share your memories.

Send flowers to the Stevenson family.