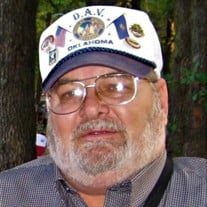 Donnie Jewell McGlothlin, 72, passed on Monday, March 22, 2021. Donnie was born on February 3, 1949, in Syracuse, NY, to Patsy (Norrid) and Jewell McGlothlin. He attended school in Wellington,KS and then served in the United States Army where he met his wife, Peingjai “Sam”, while stationed in Kanchanaburi, Thailand. They shared 52 years of marriage and had 2 children. Mason his favorite kid (Grandson) gets mentioned later. He retired from the Army in 1988. After serving, he worked on projects at Northrop during the development of the B-2 Bomber and ended his working career, retiring with the Lawton Public School System at Eisenhower High School where both of his children graduated. Donnie continued to serve the community and fellow Veterans until his health wouldn’t allow. He volunteered his time with the DVA, transporting vets between Lawton and OKC and has received many certificates from the US Army for his dedication long after retirement. He could fix anything and enjoyed many hobbies during his life including fishing, camping, racquetball, golf, bowling and playing dominoes or card games. Donnie loved spending time with family. He enjoyed jumping on the road and catching up with all of his relatives and showing support the best way he knew how. He loved his wife Sam and loved making up with her more. The highlight of his day was picking up his grandson from school in his little red car. Donnie was preceded in death by his Parents, Patsy and Jewell. He is survived by his wife, Peingjai McGlothlin; siblings, Watie McGlothlin and wife Beanie of Eldorado,KS; Patricia Phillippe of Wichita, KS; children, Michelle Martin and husband Robby of Piedmont,OK; Patrick McGlothlin of Edmond,OK; grandchildren, Mason McGlothlin; Jhaneé and husband Ivan; great-grandchildren, Waylon, Baker, Jonah and Evan. Visitation will be held Saturday, March 27, 2021 from 12:00PM-5:00PM with the family of Donnie being present, from 3:00PM-5:00PM at Crawford Family Funeral Service. A funeral service will be held to remember and celebrate his life the following day, Sunday, March 28, 2021 at 10:00AM at Crawford Family Funeral Service. Military honors will be presented by the United States Army. Services will be made available vis livestream here on Donnie's tribute page, just prior to services beginning on Sunday. When attending the visitation, Saturday, please use the North doors and on Sunday, for the funeral service, please use the West doors, under the carport.

Donnie Jewell McGlothlin, 72, passed on Monday, March 22, 2021. Donnie was born on February 3, 1949, in Syracuse, NY, to Patsy (Norrid) and Jewell McGlothlin. He attended school in Wellington,KS and then served in the United States Army where... View Obituary & Service Information

The family of Donnie McGlothlin created this Life Tributes page to make it easy to share your memories.

Send flowers to the McGlothlin family.