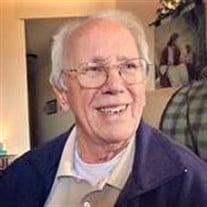 Donald L. Wiard, 84, of Edmond, OK, died peacefully on February 4, 2020 in Oklahoma City, OK holding the hand of his granddaughter, Alexis Deakins. Donald was born March 23, 1935 in Pittsburgh, Pennsylvania to Clarence E. Wiard and Julia Schuck. After graduating high school, he married Alice Jane Mitchell in 1954. They were married 48 years until Alice’s death in 2002. Donald had a brilliant Navy career that included extended service in Alaska and Guam. He had over 30 years of successful recovery in AA, and sponsored others in their recovery process. He would have received his 39th birthday chip this month. Donald was an active member of Sothern Hills Christian Church, and resident of Bradford Village in Edmond. He was a Stephens Minister, member of the Better Breathers Club, and a member of the SSR club. He owned A+ Key Supply after many years of working for Weiser Lock Company. Donald is survived by his older sister Joan Taylor, his son Warren Wiard and daughter Linda Wiard; granddaughters, Amanda Deakins, Andria Wortman and grandson, Alex Wiard. Great-grandchildren, Joshua, Alexis, and Brooklyn Deakins; Kaylee Blevins and Jace Wortman. He is preceded in passing by his wife, Alice Jane Wiard and parents Clarence and Julia. A memorial service to remember and honor Donald's life will be held Saturday, February 8, 2020 at 10:00AM at Crawford Family Funeral Service in Edmond, OK. The Rev. Dr. Robert E. Crawford will be presiding.

The family of Donald Lewis Wiard created this Life Tributes page to make it easy to share your memories.

Send flowers to the Wiard family.