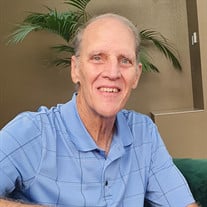 A service honoring the life of Donald Faircloth will be at 10am on Saturday, September 18th at Henderson Hills Baptist Church in Edmond. Donald Lynn Faircloth of Edmond Oklahoma went to be with our Lord and Savior on September 11, 2021 - the best win after a long battle with liver cancer. Donald was born in Fort Worth Texas to James and Alma Faircloth on October 20, 1953, as a mirror twin with his nearly identical brother Ronald. The brothers were inseparable and always enjoyed confusing teachers, swapping places, and having such a good-looking best friend. As Don grew, he enjoyed sports and music ran in the family, but he really excelled on the rings in gymnastics. He competed on many different levels from middle school on, and even won awards gaining him a spot in the Texas Olympics. He was extremely talented, featured in newspapers, traveled with his team, and performing at the top earning him numerous trophies, ribbons and opportunities. Don’s career began when he joined the United States Air Force in 1977 as active duty, where he also attended military law enforcement technical school as well as the Arkansas State Police Academy. He served as Military Police in several different assignments over the course of a few years. In 1982 he joined the Edmond Police Department while also attending the University of Central Oklahoma and completing his Bachelor of Arts in 1984. In 1985 Don joined the OSBI as a general assignment agent which was only the beginning of a great career. After graduating with a Master of Arts, Criminal Justice Management and Administration in 1990, Don was advancing in assignments to tackle drug cartels, auto theft and other undercover police work. He became widely known by many in the law enforcement community for his high character, precision of tasks and interrogation skills. In 1993 he had the opportunity to attend the Maryland Institute of Criminal Justice where he became a Polygraph examiner. He continued to advance with Polygraph examination and was appointed as Coordinator of the OSBI Polygraph Program where he served as an examiner, researcher, coordinator, program administrator and training facilitator for other agents inside and outside of the Bureau. His talents and dedication lead him to be the founder and president of the Oklahoma Polygraph Association. Don was a highly esteemed special agent with the OSBI and retired in 2018 after 33 years of service. Although Don was extraordinary in his career, his true love and joy was with his family and the Lord. He deeply loved his beautiful wife Pat (Hansen) Faircloth from the moment he knocked on her door in 1982 during a college assignment. He knew immediately that God had placed them together and were married shortly after. Don already having twin daughters (Katie & Holly) and Pat having a son (Matt), they dedicated their family to the Lord and were together blessed with 3 more children, Alicia, Rebekah and David. Don was a fantastic father; he was known to paint the girls’ nails and try to fix their hair, play ball with the boys, coach football, basketball & baseball teams throughout the years, help with school, teach the teens to drive, show how to seek the Lord and how to have fun in different situations life gives you. If Pat or the kids ever had an event, you could count that Don was there to support them. He loved working outside with his hands, teaching his children the value of hard work and making sure that things were done correctly the first time. He most of all loved any and all time just being with Pat, she was his best friend. Between 2005-2019 Don has been blessed with 18 grandchildren whom he adored! He was caught constantly being a great papa – giving the grandkids lots of ‘papa treats’, swimming, taking a crew of kids to help him with the chickens, starting bon fires, singing songs, riding wiggle cars, taking helpers to see the cows or playing on the playground. He led by example and faithfully mentored family, co-workers, friends and lead a Sunday school class at Henderson Hills Baptist Church. If there was any one in need Don was there to help - he was dependable and strong, a humble servant who loved the Lord with all of his heart. Don was wise with experience and rich in love, his honesty and resolute character was evident to all who knew him. We are thankful for his legacy and example in Christ. Don Faircloth’s life was well lived with sole intention to glorify the Lord, steadfast in truth and abounding with love, now blessed and walking in heaven with our Savior. Don is preceded in death by his parents - James and Alma Faircloth, Brothers – Jim Faircloth & Bobby Gene Faircloth, Andrew Faircloth and Sister – Elizabeth Faircloth. He is survived by his beloved wife – Pat Faircloth, Children – Matt & Amber Olsen, Alicia & Brian Santiago, Rebekah & Nick Butenhoff, David & Miranda Faircloth, Katie & Theoden Wedel, Holly & Paul Brown. 18 Grandchildren. Brother – Ron & Carolyn Faircloth and family.

A service honoring the life of Donald Faircloth will be at 10am on Saturday, September 18th at Henderson Hills Baptist Church in Edmond. Donald Lynn Faircloth of Edmond Oklahoma went to be with our Lord and Savior on September 11, 2021 -... View Obituary & Service Information

The family of Donald Lynn Faircloth created this Life Tributes page to make it easy to share your memories.

A service honoring the life of Donald Faircloth will be at 10am...

Send flowers to the Faircloth family.