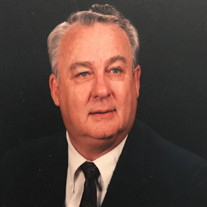 Don Howland, age 85, passed from this world in the early morning hours on Thursday, March 28, 2019 in Edmond, OK. Don was born on October 23, 1933 in Forest City, IA to Eugene and Leona (Johnson) Howland. He was a scholarship member of the basketball team and received his B.A. degree from East Texas Baptist University in Marshall, TX in 1957. After several years in ministry in north Texas, he moved in 1964 to Oklahoma to serve as Field Director for the Boy Scouts of America. In 1972 he went to work as General Manager of Duncan Power and Light, where he eventually retired in 1998. Don could keep you entertained for hours with his gift of storytelling and jokes, and he also enjoyed being outdoors working with his hands, golfing, or fishing. But his primary pastime was spent investing in people and in the city of Duncan that he was so proud of. He was easily one of her biggest fans. Over the years he was an active member in several organizations including: the Duncan Kiwanis Club, Chamber of Commerce, and Duncan Rescue Mission. One of his most cherished involvements was with Think Ability, where he was a founding board member and served as President the last several years. Don was preceded in death by his father, Eugene, and his mother Leona. He is survived by his son Eugene Howland and his wife Shana of Edmond, OK, and their daughters Cassidy and Amanda, both currently attending OU. Also, by his two sisters, Dariel Neuberger and her husband Donald of Clear Lake, IA and Lois Walker and her husband Sonny of Pleasant Hill, IA. A celebration of life memorial will be held at 11:00 AM on Saturday, April 6th at the Duncan Moose Lodge. Visitation and lunch at noon will be provided following the celebration. In lieu of flowers, memorial donations may be made to Think Ability, Inc. (www.thinkabilityfirst.com).

Don Howland, age 85, passed from this world in the early morning hours on Thursday, March 28, 2019 in Edmond, OK. Don was born on October 23, 1933 in Forest City, IA to Eugene and Leona (Johnson) Howland. He was a scholarship member of the... View Obituary & Service Information

The family of Don Howland created this Life Tributes page to make it easy to share your memories.

Don Howland, age 85, passed from this world in the early morning...

Send flowers to the Howland family.