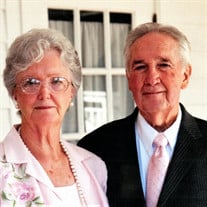 Don was born on November 15, 1927 in Olathe, Kansas, to Archie Cade and Allie (Grover) Cade, and passed away at home in Frisco, Texas on November 4, 2020. He is preceded in death by his parents and brothers, Walter and Wyeth Cade, and sister, Lillian (Cade) Dill. He attended Olathe, Kansas, public schools, and college in Missouri and in Sacramento, California. After high school, Don enlisted in the U.S. Army and was a Veteran of World War II and the Korean War. Don was employed at the Westinghouse Electric Company in Kansas City for eight years, working in the production of jet engines for the U.S. Navy. He moved his family to Sacramento, California in 1962, to work in Manufacturing Engineering for the Aerojet Propulsion Company, where he worked for 32 years until his retirement. Aerojet manufactured the Propulsion and Solid Fuels for engines on the Polaris, Titan, Minuteman, and other missile systems. He is survived by his wife of 68 years, Robbie J. (Milner) Cade, and his two daughters, Debra (Cade) Langdon of Edmond, OK and Marcia (Cade) Bean of Frisco, TX. Don is also survived by his three grandchildren, Brent Langdon, Emily Langdon and Devin Bean, as well as his four great-grandchildren, Richard Flores, Dawson Bean, and Ayden and Harper Langdon. Don will be laid to rest at Memorial Park Cemetery in Oklahoma City, Oklahoma on Veteran’s Day, Wednesday, November 11, 2020. Prior to entombment, there will be a private family service held to remember and celebrate Don's life on Wednesday, November 11, 2020 at 1:00PM at Crawford Family Funeral Service. The services for Don will be made available via livestream, here on Don's tribute page, just prior to services beginning. Again, the service will be private, for family only to attend. There will be a come-and-go visitation held for anyone wishing to stop by and pay their respects to Don on Tuesday, November 10, 2020 from 2:00PM-5:30PM at Crawford Family Funeral Service.

Don was born on November 15, 1927 in Olathe, Kansas, to Archie Cade and Allie (Grover) Cade, and passed away at home in Frisco, Texas on November 4, 2020. He is preceded in death by his parents and brothers, Walter and Wyeth Cade, and sister,... View Obituary & Service Information

The family of Don Cade created this Life Tributes page to make it easy to share your memories.

Send flowers to the Cade family.