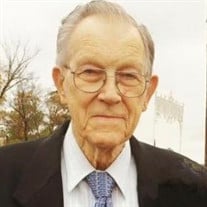 Deuward L Smith (Smitty /PaPa) was born in a barn in Cleburne County, Arkansas on September 25, 1931. After graduating high school, he joined the Air Force. He worked as a trailer repair mechanic and then supervisor, retiring from Sooner Great Dane only to start an air tool business at home. Deuward would also help out at City Trailer in OKC. He loved tinkering in the yard and fixing things. It was not uncommon to find him in the garage fixing someone’s weed eater or power tool. If he couldn’t fix it then it wasn’t fixable. Deuward never met a stranger and made every person around him feel welcomed. He “adopted” many people along the way, some called him Papa and some called him Dad, but everyone loved him. He would listen and give advice. Being Jesus’ hands and feet were his purpose on his earthly journey as he shared his faith openly. It was important to Deuward to assure all those he knew, to have the opportunity to know Jesus Christ as their Savior. He was cared for over the past few years by his granddaughter Melissa Bernasconi who helped him be able to stay at home, especially after his stroke, until he was called to his final home Sunday morning, surrounded by family. He is proceeded in death by his parents, Franklin McKenzie Smith and Mary Ann (Garrison) Smith, and his wife of 32 years, Wilma (Knief) Smith, and also his wife of 20 years, Ruth Elaine (Hicks) Smith. He is survived by his children: Teresa Armstead of Newalla, Ivan Smith and wife Eulinda of Cashion, Brenda Davidson and husband Jim of Edmond, stepdaughter Patricia (Trish) Espedal of Stavanger Norway and Curtis Killman and wife Linda of Supulpa; Grandchildren: Melissa Bernasconi, Joshua Egerer, Rebekah LaCombe, Letisha Miller, Christopher Smith, Zachary Smith, Ashley Musante, Shane Davidson, Macy Killman, Briana Libey, and Tyra Espedal and numerous great grandchildren and “adopted” family. He was loved and will be missed by all of those who’s life was impacted by him. Memorandums may be to your favorite Christian charity or In Touch Ministries. Come-and-go visitation for Deuward will be held on Thursday, August 15, 2019 from 9 a.m. until 5:30 p.m. and on Friday, August 16 from 9 a.m. until 8 p.m. The family will be greeting friends at a reception on Friday from 5 p.m. to 7 p.m. Funeral services celebrating the life of Deuward will be held at 10 a.m. on Saturday, August 17 at Immanuel Lutheran Church, 1800 NW 36th St. Oklahoma City, OK 73118. Burial services will be at 3 p.m. at Lutheran Reedemer's Cemetery in Cushing, OK.

Deuward L Smith (Smitty /PaPa) was born in a barn in Cleburne County, Arkansas on September 25, 1931. After graduating high school, he joined the Air Force. He worked as a trailer repair mechanic and then supervisor, retiring from Sooner... View Obituary & Service Information

The family of Deuward L. Smith created this Life Tributes page to make it easy to share your memories.

Deuward L Smith (Smitty /PaPa) was born in a barn in Cleburne...

Send flowers to the Smith family.