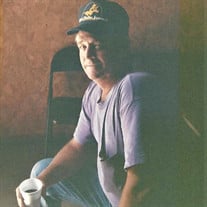 Jesse Delvin Hicks was born September 20, 1943, in Douglas, OK, to LT Hicks and Veda Olive (Webb) Hicks Smith. He was 77 years old. He passed away in the comfort of his home on Monday, January 4, 2021, with his family. He was born, raised, and resided in Crescent, OK. He graduated from Crescent High School in 1961. Soon after, on May 24th, 1961, he married June Elaine Lindell. Delvin began working in the Oil Field one month shy of his 18th birthday, with his Uncle Charlie's help. The first rig he worked on was in Weatherford, Texas. In his time in the Oil Field, he worked his way up to become a Toolpusher by the early age of 29. He could be given a rig and fix it up only to be sold and given another. He was once hired by a Canadian to oversee the building of a monstrous rig that was sent to the North Country. When the Oil Field busted in the early 80’s, he farmed for a while before he started a new career for Logan County Dist. #3 driving a road grader. Upon retiring, he continued to farm and raise cattle as he had done all his life from the time he was able to get off the seat of a tractor to push the clutch in. Delvin was a man of integrity. He was a very intelligent man who would always know what to say in any type of situation. Many people were amazed with his quick wit. He had a sense of humor and he never failed to put a smile on your face. He was loved by most anyone who met him. You could always find Delvin outside doing something productive, whether it was feeding cattle, working in the garden, or loving on his dog, Punkin. Delvin always enjoyed listening to how other peoples’ lives were going as he sipped on a big cup of coffee. What he loved most, was spending time with his family and sharing his knowledge and stories with them. Delvin was preceded in death by his parents, brothers Larry and Lorn Hicks, and son Kevin. Nephew Todd Hicks He is survived by his wife, June Hicks; they would have celebrated 60 years of marriage on May 24th of this year. In addition to his wife, he is survived by son Clint Hicks and his wife Pam of Gracemont, OK; son Kirk Hicks and wife Ramona of Crescent, OK; Grandchildren Kristi & Don Kapla, Ashlie & Chris Mann, Colton Hicks, Logan Hicks, Amanda Hicks, Elayna Palmour, Seth Palmour, Haley & Trey Lewis, Ben & Amy Palmour 11 great-grandchildren Niece Emily (Hicks) Nys, Carrie (Hicks) Powell, Tonya (Hicks) Jones Nephew Jesse Wayne Hicks Visitation for those wishing to pay their final respects to Delvin, will be held Saturday, January 16, 2021 at Crawford Funeral Service from 10:00AM-4:00PM.

Jesse Delvin Hicks was born September 20, 1943, in Douglas, OK, to LT Hicks and Veda Olive (Webb) Hicks Smith. He was 77 years old. He passed away in the comfort of his home on Monday, January 4, 2021, with his family. He was born, raised, and... View Obituary & Service Information

The family of Delvin Hicks created this Life Tributes page to make it easy to share your memories.

Send flowers to the Hicks family.