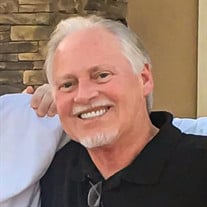 David Stephen Cossey entered his heavenly home peacefully on Wednesday, May 5, 2021, at the age of 66. Dave was born on February 21, 1955, in Elk City, OK, to Jack Cossey and Betty (Turpin) Cossey. He attended Mangum High School, graduating in 1973. After graduating, he moved to Dallas, TX, where he enrolled in an accelerated computer programming school to receive his degree in computer programming. Upon receiving his degree, he moved to Oklahoma City, OK, where he began his 42-year career at Fiserv, formerly First Data Management, starting out as a Systems Programmer and retiring as Senior Vice President of EFT Product Development in 2016. Dave spent his life exploring a myriad of hobbies & interests. As a young man, he spent his time riding bulls competitively. His interest in electronics and gadgets didn’t just end at his job, he loved to learn about technology and the evolution of it as the years went by. He participated in national level sharpshooting competitions with both pistols and rifles. During his time off, he loved to relax with friends & family––hunting, fishing, and all things outdoors––especially working on “The Palace” with one of his all-time best friends, George Mitchell. Later in life, he began to explore more creative hobbies, specifically geometric artwork. When he could, he loved attending classic rock concerts and having a good ol’ time with friends. He loved Wednesday nights with his close friends playing poker, having a few beers, and reminiscing on good times. The ONE thing that defined Dave most was how much he loved to spend an afternoon grilling & cooking amazing meals for his family––which was the most important thing in his life. Dave was preceded in death by his parents, Jack & Betty Cossey. He is survived by his son, Jacob Cossey of Oklahoma City, OK; his son Justin Cossey of Edmond, OK; his sister Donna Bull and husband Larry of Mangum, OK; his brother Don Cossey of Edmond, OK; and his brother Doug Cossey and wife Libby of Victory, OK. In lieu of flowers, donations can be made to the St. Jude Children’s Research Hospital at http://giftfunds.stjude.org/davidcossey. A time to celebrate David’s life will be from 11am-Noon on Wednesday, May 12, 2021 at Crawford Family Funeral Service, Edmond. A private family burial will follow the service in Mangum, Oklahoma. The family has requested all those attending the funeral service wear a mask if they have not received the vaccine in full––this is of the utmost importance to the family.

The family of David Stephen Cossey created this Life Tributes page to make it easy to share your memories.

Send flowers to the Cossey family.