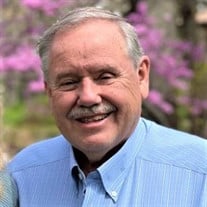 David E. (Dave) Rasmussen ended his journey on Saturday, November 20, 2021. Dave was born June 8, 1949 in Stafford, KS, to Pete and Kathy Rasmussen. He spent his formative years in Topeka, KS,, as big brother to Dawn, Jon, and Norman. Dave’s entrepreneurial spirit was born in Topeka, where he sold zinnia seeds from his mother’s garden, sharpened knives with a knife sharpener in the back of his wagon, and sold the golf balls he’d fished out of the pond back to the golfers. The family moved to the Presbyterian Youth Camp in Parkville, MO, in 1965. Much of who Dave would become was fostered at the camp: his desire to share his faith in the Lord, his love for animals and land, and his passion for photography. During this time, Dave had a mobile dark room and took pictures of campers throughout the area. Dave carried his passion for photography onto Tarkio College in the fall of 1967, where he was the official college photographer and where he met Patti in the fall of 1969. Their first date was even in a darkroom. A photography darkroom that is! As Patti’s roommate said, “They were soul mates from day one and it was young love at its best.” Dave and Patti married July 18, 1970 in the Presbyterian church in Tarkio, MO. Upon Dave’s graduation from Tarkio College in December of 1970, his photography passion led to his first real job in Topeka, KS, and ultimately Wichita, KS, where he ran Zercher Photo from 1971-1975. Trisha and Andy were born during this time in Wichita. In 1976, Dave was hired by Lawrence Photo to start a location in Oklahoma City. Dave, who would become DR to most all who knew him, was the voice of Lawrence Photo and the VCR Hospital from 1976-1989. Their youngest son Tim was born in 1977, the only Okie from the original five. Dave and Patti began Take 2 Video-Photo Productions in 1989 until it became Rasmussen Photo-Video in 2020. While Dave was the consummate savvy businessman, his passion was to ensure that all kids could see themselves as significant and important and have documentation of their accomplishments. During his years in the industry, Mr. Dave would video thousands of hours of sports and dance across the country, making all those he came in contact with feel special. Dave’s business model was people. He gave jobs to those who needed them and saw his business as an opportunity to take care of others, which was his love language. He took chances on men and women and saw potential in those who often didn’t see value in themselves. Dave gave his employees ginormous (his word) life experiences they otherwise would have never had. As a former employee said, “He showed me the world through the windows of an E-350 van.” Dave’s greatest love, however, was his family. As he grew older, being at every game, every event, every assembly for his grandkids was his most important role. He played the best Santa, making Christmas morning like a scavenger hunt with clues to everyone’s big gift. He also delighted in the accomplishments of his children and their spouses. Dave was happy to watch his “Daddy’s little girl,” Trisha, blossom as a mother. He was proud of the way she always put her children and others first, and he was excited about her new career in real estate. Spending time on the sidelines alongside his son Andy was one of Dave’s greatest life joys. Watching Andy move from behind the camera as a young man to behind the whistle as a coach provided Dave with immeasurable pride. From a young age, Tim’s keen business mind made him his dad’s right-hand man. While taking care of Dave and Patti’s business and personal logistics, Tim also achieved success in helping people find their forever homes, an accomplishment that made Dave beam with pride. It’s impossible to say Dave without saying Patti. Together for 51 years, they were Sweetie and PittyPat to one another. Through thick and thin, through good and bad, they believed their covenant was for life. A shared love of photography and travel guided their life together, and it’s a good thing, because that’s exactly what they did! Patti eventually shared Dave’s passion for animals, as evidenced by the zoo--both inside and outside--their home, and he shared her love for flowers and a beautiful yard. Maybelle, their road dog, became their new love and was Dave’s best little sidekick. Dave is preceded in death by his parents Pete and Kathy Rasmussen. He is survived by his wife Patti Anne Park of Jones, Oklahoma; his children Trisha Georgia; Andy and Stacie Rasmussen; and Tim Rasmussen and Sean Olmstead; grandchildren WO1 Drew and Morgan Rasmussen of Ft. Rucker, Alabama; Camry Georgia, currently at the University of Arkansas; Raimie Rasmussen, currently at University of Central Oklahoma; Mason Georgia, senior at Heritage Hall; Maggie Rasmussen, senior at Edmond Santa Fe; Presley Rasmussen, freshman at Heritage Hall; and Rhett Rasmussen, fifth grader at Westfield Elementary. He is also survived by his siblings Dawn Johnico, Jon and Kathy Rasmussen, and Norman and Nancy Rasmussen as well as many nieces and nephews. A football scholarship will be established in Dave’s name at Santa Fe High School. In lieu of flowers, the family requests donations to the Dave Rasmussen SantaFe Football Scholarship Fund. Envelopes will be provided at the service for your convenience. https://gofund.me/7d06c1a8 A memorial service to remember and celebrate Dave's life will be held Monday, November 29, 2021 at Crawford Family Funeral Service in Edmond at 10:00AM. Visitation with the family of Dave will be held the afternoon prior, Sunday, November 28, 2021 at Crawford Family Funeral Service from 2:00PM-4:00PM. Services Monday will be made available via livestream here on Dave's tribute page, just prior to services beginning. Inurnment will take place on a later date at Memorial Park Cemetery in Oklahoma City. Following services Monday, the family of Dave would like to invite all able to attend, to a reception. Location details will be announced during services.

The family of Dave Rasmussen created this Life Tributes page to make it easy to share your memories.

Send flowers to the Rasmussen family.