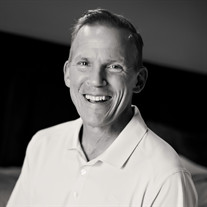 Darin Wess McBride, of Edmond died on February 9, 2019 at the age of 52, after a valiant battle with cancer. He passed peacefully at home surrounded by his family. Darin was born on September 8, 1966 by John Wesely McBride and Mary Louise McBride in Fort Polk, Louisiana. He grew up in Midwest City and has great memories playing football and wrestling for the Midwest City Bombers. He attended University of Oklahoma to pursue a business finance degree. After college, Darin began work in the oil and gas industry and has worked in that field ever since. Darin met his wife, Heather in Houston. They married on April 3, 1999. They had 3 boys over the next 5 years and in June 2011 they adopted a sibling group of 3, to make them a family of 8. Darin’s kids were his greatest passion. He poured love and guidance into them on a daily basis. He worked hard to provide an incredible life of memories for them. Most importantly, he taught them about Christ and modeled what a spiritual leader in the home is. Darin was passionate about many things, but music, football, family and friends were his earthly passions. He loved all things music—singing, listening, putting together the music at events. He had an eclectic taste in music that often became the topic of conversation with other music lovers. He loved Oklahoma football and we spent every fall cheering on his favorite team in Norman. His real passion was coaching. He coached his sons little league teams for many years and was a Championship coach. Family and friends were abundant in Darin’s life. He did not meet a person that did not like him. He had a big personality and was a ton of fun to be around. He will be missed greatly. He was preceded in death by his grandparents; Mary Ruble…He is survived by his wife, Heather McBride; his six children, Caden, Seth, Wyatt, Phoenix, Elijah, and Jade; his mother, Mary Wilcox; his father and step-mother, Johnnie and Connie McBride; his sister and brother in-law; Kim and Paul Hiel; his father in-law, John Parkins; his sister in-laws and spouse, Jennifer and Jeff Kussman, Brenda Parkins and Leigh Ann Parkins; his nine nephews and nieces, John, Kayla, Rance, Jesse, Tyler, Sari Heffley and Jared, Morgan and Hannah Repplinger. His funeral services will be held at 1:00pm on Wednesday, February 13, 2019 at Henderson Hills Baptist Church. In lieu of flowers, Darin, his wife Heather, and their family, ask you to please consider making a donation to The Darin McBride Memorial Football Scholarship. The Darin McBride Memorial Football Scholarship will be awarded yearly to (1) incoming University of Oklahoma student who played little league or high school football in the amount of $2,000.00. This scholarship is combining Darin’s passions for his Alma Mater, the University of Oklahoma and his love for coaching youth football. The recipient will exemplify the traits that Darin felt important to instill into the youth he coached. He motivated players to play with everything they had, to preserve, and always give 110%, leaving everything on the field. Donations can be sent to: Oklahoma City Community Foundation C/O Darin McBride Scholarship 1000 N Broadway OKC, OK 73102

Darin Wess McBride, of Edmond died on February 9, 2019 at the age of 52, after a valiant battle with cancer. He passed peacefully at home surrounded by his family. Darin was born on September 8, 1966 by John Wesely McBride and Mary Louise McBride... View Obituary & Service Information

The family of Darin Wess McBride created this Life Tributes page to make it easy to share your memories.

Send flowers to the McBride family.