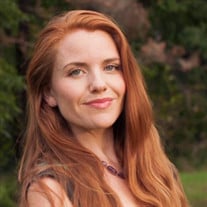 Darci’s light left this world on September 19, 2020. Darci Dahlgren Janzen was born on April 13, 1985 and she filled more love and laughter into her 35 years than many do in twice that span. Born in Oklahoma City and raised in Edmond, OK, Darci grew up surrounded by the love of her parents, Chuck and Lisa Dahlgren, her sister Holly, her grandparents Jerry and Suzanne Bugg, JoNita and Jim Dahlgren and her extended family. The family’s annual trek to Crested Butte, CO instilled in her a deep love of nature. A competitive spirit, she enjoyed playing basketball for and graduated from Santa Fe high school in Edmond. Darci then embarked on a big city adventure. She moved to Boston, earned her paralegal degree, enjoyed a successful modeling career and discovered yoga. Darci found her calling in yoga, which afforded a combination of her athleticism and desire to help others. She achieved her 200-hour instructor certification at Open Doors Yoga in Boston, became nationally registered with Yoga Alliance, then further certified in child and prenatal yoga. Darci was the Kidz Yoga Fairy and founder of Yoga Bliss; she loved her yoga community deeply. Darci met her husband, Michael Janzen, through her cherished practice at 3rd Street Yoga. It was love at first sight and they embarked on two major journeys together: parenthood and opening their own business. Darci’s studio was her platform, where she shared space and energy in hopes of enriching others. Darci loved humanity and wanted nothing but bliss for every person and creature she met. This love translated so beautifully into her motherhood. Charlie and Kit were her two princes, who she loved with her entire soul. She brought her special zest to the act of mothering, teaching the boys about breath and peace while also beating them at Mario Cart. Darci saw beauty in every single thing she encountered. Never content to settle for the ordinary, she referred to her husband as her soul mate, her sons as her precious princes, and mere acquaintances as lovers. She strove to bring the magical to every experience and interaction. While beautiful on the outside, it was her kind and radiant soul that brought light to others. She traveled often with her husband, Michael, and was blessed to have seen many world wonders. Darci is preceded in death by her uncle Joe Bugg, her cousin Jarrod Bugg, her mother-in-law, Cherine Janzen, her grandfather Jim Dahlgren and a host of other relatives. She is survived by her husband Michael Janzen, sons Charlie and Christopher, parents Chuck and Lisa Dahlgren, sister Holly and her husband Jared Smith and nieces Simone and Naomi, father-in-law Howard Janzen, grandparents Suzanne and Jerry Bugg, grandmother JoNita Dahlgren and a large, loving family. Darci was the essence of all things that are good. Her heart of gold touched many people around the nation and the world. She had a vibrant soul and was treasured by many. A viewing is available Thursday, September 24 from 6:00 – 8:00 pm at Crawford Funeral Service in Edmond. Her celebration of life will take place at Crossings Community Church on Friday, September 25, 2020 at 11 am. For those unable to attend, her service will be broadcast at https://vimeo.com/460349042/6d99f2796e.

Darci&#8217;s light left this world on September 19, 2020. Darci Dahlgren Janzen was born on April 13, 1985 and she filled more love and laughter into her 35 years than many do in twice that span. Born in Oklahoma City and raised in Edmond,... View Obituary & Service Information

The family of Darci Anne Janzen created this Life Tributes page to make it easy to share your memories.

Send flowers to the Janzen family.