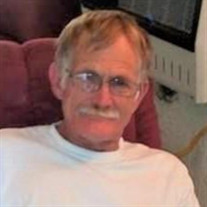 Daniel Lee Shoopman, fondly known as “Danny”, passed away on April 9, 2020. Danny was born on December 16, 1954 to Lee D. Shoopman and Helen L. (Robnett) Shoopman. He was born and raised in Choctaw, Oklahoma. Danny later went on to leave Choctaw and he spent some time in the military. He then had 3 children, Debra, Raymond and Dani Lynn. In Danny’s recent years he was an active member of 1st Christian Church of Hydro before moving to Edmond. Danny is preceded in death by both his parents, Lee and Helen Shoopman and daughter, Debra. He is survived by his son, Raymond Shoopman and wife Selena of Fort Cobb, Oklahoma; daughter, Dani Lynn East of Edmond, Oklahoma; grandchildren, Christopher, Ally, Gracie and Desiree as well as other family members. Danny will be greatly missed by his friends and family, who loved him dearly. A private family service celebrating the life of Danny will be held on Wednesday, April 22, 2019 at 2 p.m. at the Crawford Funeral Service Chapel. Danny will be laid to rest on Thursday, April 23, 2020 at Ft. Sill National Cemetery in Elgin, OK.

The family of Daniel L. "Danny" Shoopman created this Life Tributes page to make it easy to share your memories.

Daniel Lee Shoopman, fondly known as “Danny”, passed away on...

Send flowers to the Shoopman family.