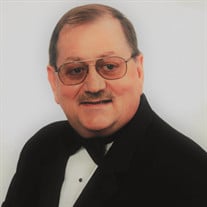 A service honoring the life of Dale King will be at 10am on Monday, August 10th at Crawford Family Funeral Service, Edmond. Dale Vernon King, 72, passed away on August 3, 2020 at Bradford Village in Edmond, OK. Parkinson’s Disease led to his demise. He entered this world on March 8, 1948 in Santa Fe, NM, born to Herschel and Ailene (Manning) King. He grew up helping in his family’s hotel, King’s Rest Court, which was the first business to have a neon sign in Santa Fe. Dale graduated from New Mexico Military Institute in 1966. He attended East Central University in Ada, Oklahoma before moving to Portales, New Mexico to open a clothing store. Dale then moved to Ardmore, Oklahoma in 1971 to begin selling insurance for Kentucky Central Life Insurance and having his first daughter, Kelly, that same summer. Dale then moved the business to Norman, Oklahoma in October, 1973 and his second daughter, Wendy, was born in 1974. Dale continued working in the insurance industry his entire career. After leaving Norman, he took his career level to Executive Director of Marketing serving insurance companies across the nation. Dale met his wife, Lesa Jelden, in Lincoln, Nebraska in 2001 and was married on July 31, 2004 and gained his third daughter, Sara, by marriage. Dale and Lesa returned to Edmond, OK in 2007. Dale continued working insurance until he was no longer able to continue due to his health when he was moved to Bradford Village in 2013. Dale continued to be active by serving as a volunteer Marketing Director and President of the Client’s Association at Bradford Village. He performed in the arts through the theatrical plays produced by Bradford Village. Dale was always the “Big Guy” in life. He loved dancing, telling stories, drinking scotch, playing cribbage and gin rummy, winning at Bingo, and football games, whether it was OU or Nebraska. He especially loved spending time with his family and friends. Dale was preceded in death by his Father, Mother, baby Sister, Camille, and Brother, Chris King. He is survived by his wife, Lesa King, of the home; his three daughters, Kelly Wilson and her husband Darren of Prosper Texas, Wendy Fugate and her husband Jeff of Norman, Oklahoma, and Sara Bartruff and her husband Tyler of Omaha, Nebraska; and six grandchildren, Lauren Neal, Jake Neal, Jarod Fugate, Kadence Fugate, Ryland Fugate, and Callan Bartruff. Memorials in lieu of flowers may be made to the Parkinson’s Foundation.

A service honoring the life of Dale King will be at 10am on Monday, August 10th at Crawford Family Funeral Service, Edmond. Dale Vernon King, 72, passed away on August 3, 2020 at Bradford Village in Edmond, OK. Parkinson&#8217;s Disease led... View Obituary & Service Information

The family of Dale V. King created this Life Tributes page to make it easy to share your memories.

A service honoring the life of Dale King will be at 10am on Monday,...

Send flowers to the King family.