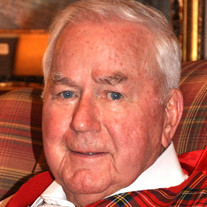 Dale Wayne Folks was a bargain for the world! Born on October 10, 1925, near Hydro, Oklahoma, the cost of his delivery was $25.00. His father&#8217;s canceled check to country doctor, J.J. Heinke, with the memo: for ONE BOY, is framed and... View Obituary & Service Information

The family of Dale Folks created this Life Tributes page to make it easy to share your memories.

Dale Wayne Folks was a bargain for the world! Born on October...

Send flowers to the Folks family.