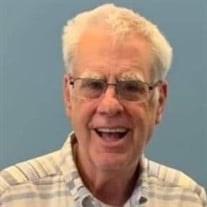 On Tuesday, January 5th, 2021, Craig M. Hale passed away at the age of 70. Craig was born on June 12th, 1950 in Wichita, KS to Kenneth and Alma Hale. In 1951, the family moved to Oklahoma City and four years later, to Norman. He attended Norman Public Schools before moving to Dallas, TX in 1969 where he took part in a school for adults with disabilities. He returned to Oklahoma in 1972 where he lived and worked at the Cerebral Palsy Workshop. The workshop promoted the independence and job skills for individuals with intellectual and development disabilities. In 1980, he moved into a group home called Rainbow H.I.L where he lived for 35 years. In 2015, he joined Nancy & Carole with a move to Kansas and continued to live with them once they returned to Edmond. Craig participated in Special Olympics where he won medals and trophies for bowling and running track. He was a member of the local chapter of People First where he served as a state officer. Craig had a passion for collecting visitor guides from all over the United States. He had an amazing memory for dates, people, and history. He loved to play Wii and computer games. He assembled many jigsaw puzzles and could do word search puzzles for hours. He loved OU football and followed the Thunder and the Cleveland Browns. He also enjoyed camping, eating out, and taking trips. He adored dogs and loved each and every rescue that lived in the house. He loved to take them for walks, and they loved sitting on his lap. After moving to Edmond, he became involved with the Wings Social club. He enjoyed socializing and being among friends. Craig was known for his kind heart and compassionate spirit. He loved everyone and never met a stranger. He only saw the good in people and the world. He touched many people with his innocent nature and pure love. Craig was preceded in death by his parents and his younger brother Ken. He is survived by his sister Nancy, and her wife Carole, sister-in-law Lesa, several cousins and one remaining aunt, Carole’s sister, brother-in-law, nieces, nephews, great niece and great nephews. In lieu of flowers if desired, memorial donations may be made to an animal organization the family is involved with. Kanoa Rescue Foundation 1116 SW 53rd St Oklahoma City, OK 73019 Services celebrating the life of Craig will be held at 1 p.m. on Saturday, January 9, 2021 at the Crawford Family Funeral Service Chapel, 610 NW 178th St. Edmond, OK 73012. Family and friends are strongly encouraged to wear a mask if attending in person. As much as the family would love to hug and shake your hand, they are encouraging that no physical contact be allowed, due to the circumstances of Covid-19. Those wishing to attend the service digitally may do so on Craig's tribute page, under Photos/Videos/Media tab. The Live Webcast link will come on 5 minutes prior to the service on Saturday.

On Tuesday, January 5th, 2021, Craig M. Hale passed away at the age of 70. Craig was born on June 12th, 1950 in Wichita, KS to Kenneth and Alma Hale. In 1951, the family moved to Oklahoma City and four years later, to Norman. He attended Norman... View Obituary & Service Information

The family of Craig Hale created this Life Tributes page to make it easy to share your memories.

Send flowers to the Hale family.