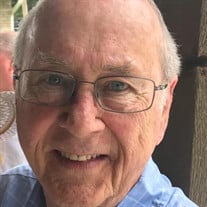 Coy Allen Copeland, 87, of Edmond, passed away November 11, 2021, of natural causes. He was born October 12, 1934, in rural Jackson County, Oklahoma, to Gladys and Herschel Copeland. The family later moved into Mangum where Coy attended school, graduating from Mangum High School in the class of 1952. After a move to California in his late teens and an abbreviated first attempt at college, Coy entered the peacetime Army, serving as a radio repair operator. Upon his discharge, he moved back to Oklahoma where he got serious about his education, and soon after met his wife Elaine who he married on October 21st, 1961. Coy graduated from Central State College in May of 1962 with a degree in accounting and went to work for Pan American Petroleum Company. Within a couple of years, and after a couple of children, Coy applied to the Federal Bureau of Investigation and found his lifelong career. His job as a Special Agent took the family all around the country, first to Seattle, where their third child was born, then for an extended stay in Tucson, Arizona, before finally transferring back to the Oklahoma City office in 1976, to be closer to family. After retirement as a Supervisory Special Agent from the FBI in 1989, Coy began a second career as a private investigator. He later became an investigator for the office of the Independent Counsel for the Whitewater Investigation and spent 7 years working on the investigation first in Little Rock and then in Washington, DC. When the investigation wrapped up, Coy and Elaine moved back to Edmond to begin his second retirement at their home in rural Logan County. He kept his finger in investigating for several years as a private investigator, but gradually phased that out as they began to travel more. Coy and Elaine bought a camping trailer and set out to visit most of the National Parks in the United States, usually traveling with Coy’s sister BuRaye which they all really enjoyed. After moving from the country into a smaller place in Edmond, Coy joined a water aerobics class, read lots of western and detective novels and enjoyed spending time with his grandchildren and great-grandchildren. He was a great baby holder and loved to read to them, even if he did have to read the same book over and over. During this time Coy and Elaine made several trips around Arizona, New Mexico, and Colorado, both with and without grandsons. Coy Copeland was an amazing, kind man. He is survived by his wife of 60 years, Loi Elaine Copeland, of Edmond, daughters Dana Copeland Porter and husband Jeff, of Salida Colorado, Susan Warnock and husband David, of Edmond, and son Phillip Copeland, of Yukon, grandsons Michael Mahoney, of Bangor, ME, Ted Porter, of St. Petersburg, FL, Cameron Warnock and wife Kayla Warnock, of Edmond, Jackson Warnock and wife Ellie Warnock, of Edmond Cullen Crawford, of Oklahoma City, Tanner Copeland and fiancé Amanda Prasuhn, of Edmond and Cooper Copeland of Yukon, and great-grandchildren Jadyn Danielson, Aryia Crawford, Genevieve Crawford, DJ Warnock, Thatcher Coy Warnock and Baylor Copeland. He was preceded in death by his grandson JT Turner of Edmond and his sister BuRaye McCann of Haskell, OK. A memorial service will be held at 10:00am, Saturday, November 20, 2021 at Crawford Family Funeral Service, 610 NW 178th St., Edmond, OK. In lieu of flowers, please consider a donation to Project 66 Food and Resource Center: https://www.project66.org/

The family of Coy Copeland created this Life Tributes page to make it easy to share your memories.

Send flowers to the Copeland family.